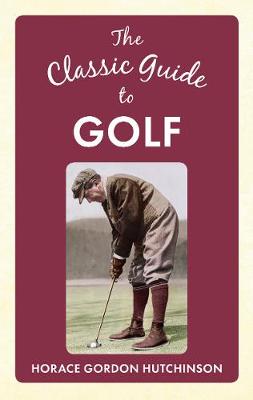 The Classic Guide To Golf

Description - The Classic Guide To Golf by Horace Gordon Hutchinson

While the modern game of golf originated in fifteenth-century Scotland, the game's ancient origins are unclear and much debated. The first written record of golf is James II's banning of the game in 1457, as an unwelcome distraction to learning archery. The world's oldest golf tournament in existence, and golf's first major, is The Open Championship, which was first played on 17 October 1860 at Prestwick Golf Club, in Ayrshire, Scotland. Horace Gordon Hutchinson won the British Amateur twice, in 1886 and 1887, and he has been described by many as the Father of Golf Instruction, writing several books on the subject. In The Classic Guide to Golf, he shares his insight into the game, and instructs the casual player or beginner in how to become truly great.

» Have you read this book? We'd like to know what you think about it - write a review about Classic Guide To Golf book by Horace Gordon Hutchinson and you'll earn 50c in Boomerang Bucks loyalty dollars (you must be a Boomerang Books Account Holder - it's free to sign up and there are great benefits!)

Horace Gordon Hutchinson began his golfing career at an early age playing on Royal North Devon. By the age of sixteen, he won the club medal championship and, by club rules, became its Captain. At the school he made his mark immediately playing number one on the golf team and leading them to victory over arch rival, Cambridge. Hutchinson's finest golf efforts occurred in the British Amateur, which he won in 1886 and 1887. He became the first player to successfully defend the championship when he beat the great John Ball on Ball's home course. He died in 1932.

A Preview for this title is currently not available.
More Books By Horace Gordon Hutchinson
View All