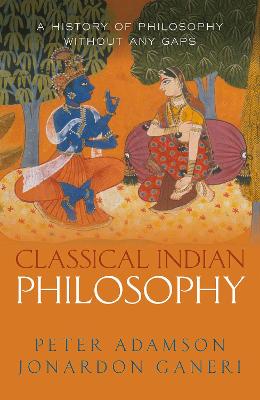 Classical Indian Philosophy: A history of philosophy without any gaps, Volume 5

Description - Classical Indian Philosophy: A history of philosophy without any gaps, Volume 5 by Peter Adamson

Peter Adamson and Jonardon Ganeri present a lively introduction to one of the world's richest intellectual traditions: the philosophy of classical India. They begin with the earliest extant literature, the Vedas, and the explanatory works that these inspired, known as Upani.sads. They also discuss other famous texts of classical Vedic culture, especially the Mahbhr=ar=ata and its most notable section, the Bhagavad- G=ita, alongside the rise of
Buddhism and Jainism. This opening section emphasizes the way that philosophy was practiced as a form of life in search of liberation from suffering. From there, Adamson and Ganeri move on to the explosion of philosophical
speculation devoted to foundational texts called 'sutras,' discussing such traditions as the logical and epistemological Ny=aya school, the monism of Advaita Ved=anta, and the spiritual discipline of Yoga. The final section charts further developments within Buddhism, highlighting Nag=arjuna's radical critique of 'non-dependent' concepts and the no-self philosophy of mind found in authors like Dign=aga, and within Jainism, focusing especially on its 'standpoint' epistemology. Adamson and Ganeri
then conclude by considering much-debated question of whether Indian philosophy may have influenced ancient Greek philosophy and the impact that this area of philosophy on later Western thought. Unlike
other introductions that cover the main schools and positions, consider philosophical themes such as non-violence, political authority, and the status of women, while also covering textual traditions typically left out of overviews of Indian thought, like the C=arv=aka school, Tantra, and aesthetic theory.

Book Reviews - Classical Indian Philosophy: A history of philosophy without any gaps, Volume 5 by Peter Adamson

» Have you read this book? We'd like to know what you think about it - write a review about Classical Indian Philosophy: A history of philosophy without any gaps, Volume 5 book by Peter Adamson and you'll earn 50c in Boomerang Bucks loyalty dollars (you must be a Boomerang Books Account Holder - it's free to sign up and there are great benefits!)