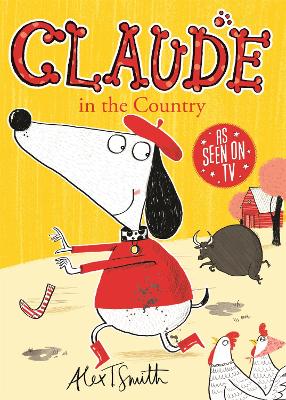 Claude in the Country

Description - Claude in the Country by Alex T. Smith

Claude in the City was selected for the Waterstone's Children's Book Prize 2012 and the Richard and Judy Book Club 2011. This is the fourth title in the series.A quiet walk in the country turns into a busy day on the farm when Claude ends up mucking out the pigs, feeding the chickens, and lassoing a fearsome bull!An hilarious series for new readers and also great for sharing. There are two new books to come - Claude in the Spotlight (April 13) and Claude on the Slopes (Oct 13).

Other Editions - Claude in the Country by Alex T. Smith Book Reviews - Claude in the Country by Alex T. Smith

» Have you read this book? We'd like to know what you think about it - write a review about Claude in the Country book by Alex T. Smith and you'll earn 50c in Boomerang Bucks loyalty dollars (you must be a Boomerang Books Account Holder - it's free to sign up and there are great benefits!)