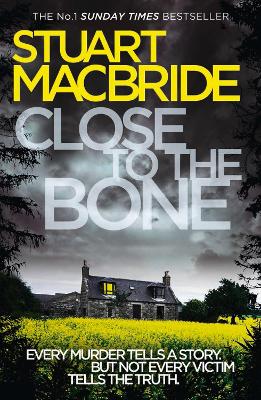 Close to the Bone

Description - Close to the Bone by Stuart MacBride

The eighth Logan McRae novel in the No.1 bestselling crime series from Stuart MacBride.

Every murder tells a story. But not every victim tells the truth.

'A terrific writer ... McRae is a delight' The Times

Sticks and stones may break your bones...

The first body is chained to a stake: strangled, and stabbed, with a burning tyre around its neck. But is this a gangland execution or something much darker?

When another body turns up, the similarities between these murders and the plot of a bestselling novel seem like more than just a coincidence. And perhaps those little knots of bones are more important than they look...


Book Reviews - Close to the Bone by Stuart MacBride

» Have you read this book? We'd like to know what you think about it - write a review about Close to the Bone book by Stuart MacBride and you'll earn 50c in Boomerang Bucks loyalty dollars (you must be a Boomerang Books Account Holder - it's free to sign up and there are great benefits!)

Stuart MacBride is the No 1 bestselling author of the Logan McRae series and Birthdays for the Dead. The McRae novels have won him the CWA's Dagger in the Library, the Barry Award for Best Debut Novel, and Best Breakthrough Author at the ITV3 Crime Thriller Awards. In 2012 Stuart was inducted into the ITV3 Crime Thriller Hall of Fame. Stuart's other works include Halfhead, a near-future thriller, Sawbones, a novella aimed at adult emergent readers, and several short stories. He lives in the north-east of Scotland with his wife, Fiona and cat, Grendel.