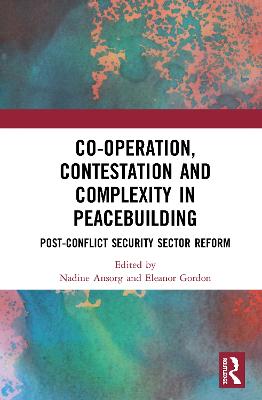 Security Sector Reform (SSR) remains a key feature of peacebuilding interventions and is usually undertaken by a state alongside national and international partners. External actors engaged in SSR tend to follow a normative agenda that often has little regard for the context in post-conflict societies. Despite recurrent criticism, SSR practices of international organisations and bilateral donors often remain focused on state institutions, and often do not sufficiently attend to alternative providers of security or existing normative frameworks of security.

This edited collection explores three aspects that add an important piece to the puzzle of what constitutes effective Security Sector Reform (SSR). First, the variation of norm adoption, norm contestation and norm imposition in post-conflict countries that might explain the mixed results in terms of peacebuilding. Second, the multitude of different security actors within and beyond the state which often leads to multiple patterns of co-operation and contestation within reform programmes. Third, how both the multiplicity of and tension between norms and actors further complicate efforts to build peace or, as complexity theory would posit, influence the complex and non-linear social system that is the conflict-affected environment.

The chapters in this book were originally published as a special issue of the Journal of Intervention and Statebuilding.

» Have you read this book? We'd like to know what you think about it - write a review about Co-operation, Contestation and Complexity in Peacebuilding: Post-Conflict Security Sector Reform book by Nadine Ansorg and you'll earn 50c in Boomerang Bucks loyalty dollars (you must be a Boomerang Books Account Holder - it's free to sign up and there are great benefits!)


A Preview for this title is currently not available.
More Books By Nadine Ansorg
View All