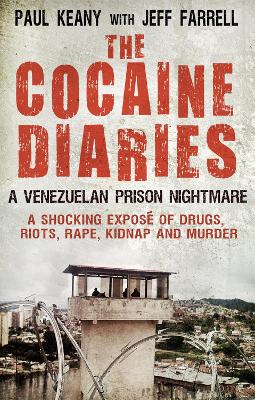 A shocking expose of drugs, riots, rape, kidnap and murder

'It won?t happen to me. That?s what I thought when I got on the plane to Venezuela. But it did - I got caught.?Caught smuggling half a million euros? worth of cocaine, Paul Keany was sexually assaulted by Venezuelan anti-drugs officers before being sentenced to eight years in the notorious Los Teques prison outside Caracas. There he was plunged into a nightmarish world of coke-fuelled killings, gun battles, stabbings, extortion and forced hunger strikes until finally, just over two years into his sentence, he gained early parole and embarked on a daring escape from South America . . .Aided by his extensive prison diaries, Keany reveals the true horror of life inside Los Teques- a shocking underworld behind bars where inmates pay protection money to stay alive, prostitutes do the rounds and vast amounts of cocaine are smuggled in for cell-block bosses to sell on to prisoners for huge profits. The Cocaine Diaries is a remarkable story, told by Keany with honesty, courage and even humour, despite knowing that every day behind bars might have been his last.

» Have you read this book? We'd like to know what you think about it - write a review about Cocaine Diaries book by Jeff Farrell and you'll earn 50c in Boomerang Bucks loyalty dollars (you must be a Boomerang Books Account Holder - it's free to sign up and there are great benefits!)

Paul Keany was a successful self-employed plumber until the Irish property crash in 2008. An aspiring novelist, he has turned his back on the murky world of drug-smuggling to focus on a life of writing. Born and raised in Oxford, he now lives in Dublin. Jeff Farrell is an independent Irish journalist and documentary maker specialising in Latin American affairs. His work has appeared in various publications, including The Guardian and the Daily Telegraph. He currently lives in Dublin.

A Preview for this title is currently not available.
More Books By Jeff Farrell
View All