Funny and fast paced, a meta-fiction fantasy at it's most magnificent.

They're back. And they want revenge...Sent to investigate the brutal slaughter of a wendigo in the north Michigan town of Tamarack, Isaac Vainio and his companions find they have wandered into something far more dangerous than a simple killing.A long established werewolf territory, Tamarack is rife with ancient enemies of Libriomancy who quest for revenge. Isaac has the help of Lena Greenwood, his dryad bodyguard born from the pages of a pulp fantasy novel, but he is not the only one in need of her unique and formidable powers... 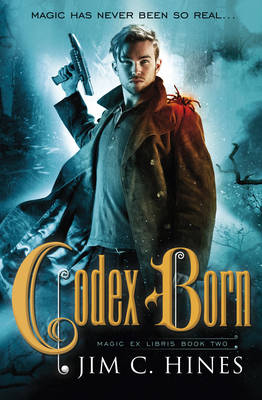 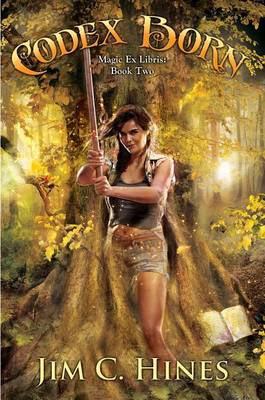 » Have you read this book? We'd like to know what you think about it - write a review about Codex Born book by Jim C. Hines and you'll earn 50c in Boomerang Bucks loyalty dollars (you must be a Boomerang Books Account Holder - it's free to sign up and there are great benefits!)

Codex Born is the second book of the Magic ex Libris series by American author, Jim C. Hines. Some months after receiving official permission, Isaac Vainio is enjoying his role as a magic researcher and investigating the intriguing possibility of Libriomancing from ebooks with a young student, Jeneta Aboderin. When he gets a call about a mutilated wendigo, he heads out to investigate this baffling murder. Magic allows him to return to the moment of the killing, and it looks like a rogue Libriomancer may be involved.

But Isaac and his dryad lover, Lena Greenwood, have more problems to deal with at home: something is attacking Lena’s oak tree, and all their skill and intellect are needed to overcome this threat. The source of the problem proves to be a surprise, and soon they begin to realise just how far-reaching the menace could be.

This is another fast-paced adventure that will delight fans. As well as a highly original plot with plenty of twists, Isaac’s arsenal of books and their potential weapons are a tribute to the fantasy genre. Hines gives the reader some interesting concepts: use of a chronoscope as a time viewer, a sort of reverse Midas touch effect that corrodes metals, some very different computer bugs, paper cuts of a rather dangerous kind, glasses of the babel fish variety, love potion as a weapon and the idea that reading a book in the middle of a battle could be just the right thing to do.

Each chapter is prefaced by a narrative that describes events in Lena’s life since the moment of her “birth”, thus developing her character in tandem with Isaac’s description of their current adventure. Readers who enjoy this instalment will be eager to dive into the next book of this brilliant series, Unbound.

Jim C. Hines' is the author of Libriomancer as well as a number of other fantasy books. His short fiction has appeared in more than 40 magazines and anthologies. Jim lives in Michigan with his wife and two children. Online, he can be found at http-//www.jimchines.com.

A Preview for this title is currently not available.
More Books By Jim C. Hines
View All