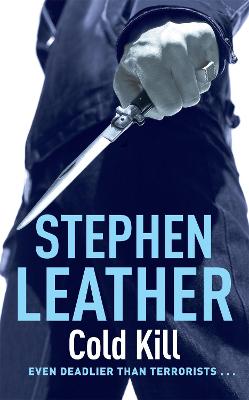 Even deadlier than terrorists . . . are the men trying to stop them. People-smuggling, counterfeit currency and attempted murder. It's all in a day's work for undercover cop Dan 'Spider' Shepherd. But what starts as a run-of-the mill investigation quickly turns into a matter of life and death when he uncovers a terrorist cell on a mission of death and destruction. The target: hundreds of passengers on a cross-channel train deep below the English Channel. With the clock ticking and the explosives primed, Shepherd and his colleagues have to decide just how far they are prepared to go to save innocent lives. And they realise that to avoid catastrophe, they have to be even more merciless than the terrorists.

» Have you read this book? We'd like to know what you think about it - write a review about Cold Kill book by Stephen Leather and you'll earn 50c in Boomerang Bucks loyalty dollars (you must be a Boomerang Books Account Holder - it's free to sign up and there are great benefits!)

Stephen Leather was a journalist for more than ten years on newspapers such as The Times, the Daily Mail and the South China Morning Post in Hong Kong. His bestsellers have been translated into more than ten languages. He has also written for television shows such as London's Burning, The Knock and the BBC's Murder in Mind series. You can find out more from his website, www.stephenleather.com.