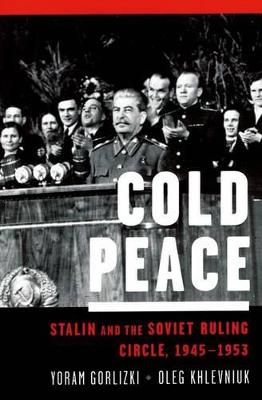 Following his country's victory over Nazi Germany, Joseph Stalin was widely hailed as a great wartime leader and international statesman. Unchallenged on the domestic front, he headed one of the most powerful nations in the world. Yet, in the period from the end of World War II until his death, Stalin remained a man possessed by his fears. In order to reinforce his despotic rule in the face of old age and uncertain health, he habitually humiliated and terrorized
members of his inner circle. He had their telephones bugged and even forced his deputy, Viacheslav Molotov, to betray his own spouse as a token of his allegiance. Often dismissed as paranoid
and irrational, Stalin's behavior followed a clear political logic, contend Yoram Gorlizki and Oleg Khlevniuk. Stalin's consistent and overriding goal after the war was to consolidate the Soviet Union's status as a superpower and, in the face of growing decrepitude, to maintain his own hold as leader of that power. To that end, he fashioned a system of leadership that was at once patrimonial-repressive and quite modern. While maintaining informal relations based on personal loyalty at the apex
of the system, in the postwar period Stalin also vested authority in committees, elevated younger specialists, and initiated key institutional innovations with lasting consequences. Close
scrutiny of Stalin's relationships with his most intimate colleagues also shows how, in the teeth of periodic persecution, Stalin's deputies cultivated informal norms and mutual understandings which provided the foundations for collective rule after his death. Based on newly released archival documents, including personal correspondence, drafts of Central Committee paperwork, new memoirs, and interviews with former functionaries and the families of Politburo members, this book will appeal to
all those interested in Soviet history, political history, and the lives of dictators. Cold Peace was a CHOICE Outstanding Academic Title for 2005.

» Have you read this book? We'd like to know what you think about it - write a review about Cold Peace book by Yoram Gorlizki and you'll earn 50c in Boomerang Bucks loyalty dollars (you must be a Boomerang Books Account Holder - it's free to sign up and there are great benefits!)

Yoram Gorlizki teaches Russian politics and history at the University of Manchester, where he is a Senior Lecturer in the Department of Government, and Oleg Khlevniuk is a Senior Research Fellow at the State Archive of the Russian Federation.

A Preview for this title is currently not available.
More Books By Yoram Gorlizki
View All