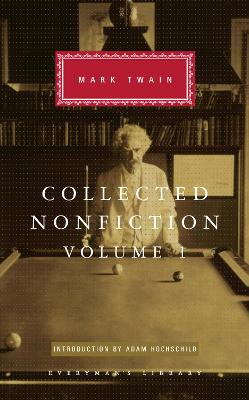 Selections from the Autobiography, Letters, Essays, and Speeches

The first of two new hardcover volumes collecting the major nonfiction writings of the 'father of American literature', a legend in his own time- more than 150 letters, essays and speeches selected to showcase the extraordinary range of his interests and passions, as well as generous excerpts from his Autobiography. An Everyman's Library original.

Politics, religion, culture, travel, science and technology, family life- nothing escaped the eye and pen of Samuel Langhorne Clemens, better known as Mark Twain, nineteenth-century America's most famous writer and a legend in his own lifetime. Though chiefly known today for his classic novels of childhood, Tom Sawyer and Huckleberry Finn, and for his short stories, he produced even more nonfiction of an impressive quality.

Twain lived a life as exciting as his fiction, and in his Autobiography we find him running wild, like the heroes of his novels, in the countryside around his childhood home in Missouri and navigating the treacherous waters of the Mississippi River as a trained steamboat pilot, while his letters show him travelling thousands of miles over the United States on hectic lecture tours (he was a great showman, raconteur and performer of his own works), hobnobbing with princes and presidents and being lionized in the capitals of Europe.

His trademark wit, candour, sarcasm and irrepressible humour shine through on every page of this selection, but here too, beyond the entertainer, we discover in his speeches and essays the social and moral issues - slavery, imperialism - which concerned him, and meet the private man behind that towering public figure, whose long marriage never lost its romance, but who bore the sorrow of losing two of his three daughters while still in their twenties. 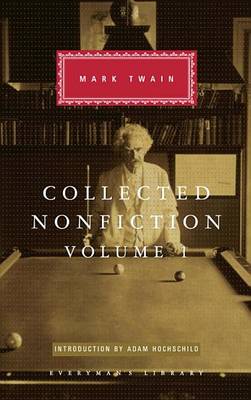 » Have you read this book? We'd like to know what you think about it - write a review about Collected Nonfiction Volume 1 book by Mark Twain and you'll earn 50c in Boomerang Bucks loyalty dollars (you must be a Boomerang Books Account Holder - it's free to sign up and there are great benefits!)

AUTHOR BIOGRAPHY Mark Twain was the pen name of Samuel Langhorne Clemens, born in Missouri in 1835. He was a typesetter, a river-boat pilot on the Mississippi and a gold prospector before achieving enormous fame as a writer and public speaker. On his death in 1910 President William Howard Taft said of him- "Mark Twain gave pleasure - real intellectual enjoyment - to millions, and his works will continue to give such pleasure to millions yet to come... His humour was American, but he was nearly as much appreciated by Englishmen and people of other countries as by his own countrymen. He has made an enduring part of American literature.o INTRODUCER BIOGRAPHY Adam Hochschild is a journalist and the award-winning author of eight books, including King Leopold's Ghost, Bury the Chains and To End All Wars. He teaches narrative writing at the Graduate School of Journalism at the University of California at Berkeley.