'It's a superb piece of work, wonderfully done and essential reading for anyone who cares for his country. Amazing research and brilliantly collated.' - John Le Carre

'Collusion is so essential and ... I wish everyone who is skeptical that Russia has leverage over Trump would read it ... Invaluable.' The New York Times

MOSCOW, July 1987. Real-estate tycoon Donald Trump visits Soviet Russia for the first time at the invitation of the government.

WASHINGTON, January 2017. Steele's explosive dossier alleges that the Kremlin has been 'cultivating, supporting, and assisting' Trump for years and that they have compromising information about him. Trump responds on twitter, 'FAKE NEWS.'

In Collusion, award-winning journalist Luke Harding reveals the true nature of Trump's decades-long relationship with Russia and presents the gripping inside story of the dossier. It features exclusive new material and draws on sources from the intelligence community.

This book gets to the heart of the biggest political scandal of the modern era. Russia is reshaping the world order to its advantage: this is something that should trouble us all. 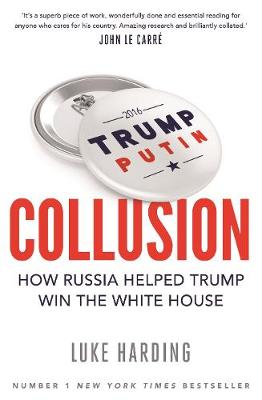 » Have you read this book? We'd like to know what you think about it - write a review about Collusion: How Russia Helped Trump Win the White House book by Luke Harding and you'll earn 50c in Boomerang Bucks loyalty dollars (you must be a Boomerang Books Account Holder - it's free to sign up and there are great benefits!)


A Preview for this title is currently not available.
More Books By Luke Harding
View All

Shadow State: Murder, Mayhem and Russia's Remaking of the West
No Stock on Hand, Supplier Has No Due Date for Supply.
$26.99 $29.99