The Color of Law

A Forgotten History of How Our Government Segregated America

Description - The Color of Law by Richard Rothstein

In this groundbreaking history of the modern American metropolis, Richard Rothstein, a leading authority on housing policy, explodes the myth that America's cities came to be racially divided through de facto segregation?that is, through individual prejudices, income differences, or the actions of private institutions like banks and real estate agencies. Rather, The Color of Law incontrovertibly makes clear that it was de jure segregation?the laws and policy decisions passed by local, state, and federal governments?that actually promoted the discriminatory patterns that continue to this day.
Through extraordinary revelations and extensive research that Ta-Nehisi Coates has lauded as "brilliant" (The Atlantic), Rothstein comes to chronicle nothing less than an untold story that begins in the 1920s, showing how this process of de jure segregation began with explicit racial zoning, as millions of African Americans moved in a great historical migration from the south to the north.
As Jane Jacobs established in her classic The Death and Life of Great American Cities, it was the deeply flawed urban planning of the 1950s that created many of the impoverished neighborhoods we know. Now, Rothstein expands our understanding of this history, showing how government policies led to the creation of officially segregated public housing and the demolition of previously integrated neighborhoods. While urban areas rapidly deteriorated, the great American suburbanization of the post?World War II years was spurred on by federal subsidies for builders on the condition that no homes be sold to African Americans. Finally, Rothstein shows how police and prosecutors brutally upheld these standards by supporting violent resistance to black families in white neighborhoods.
The Fair Housing Act of 1968 prohibited future discrimination but did nothing to reverse residential patterns that had become deeply embedded. Yet recent outbursts of violence in cities like Baltimore, Ferguson, and Minneapolis show us precisely how the legacy of these earlier eras contributes to persistent racial unrest. ?The American landscape will never look the same to readers of this important book? (Sherrilyn Ifill, president of the NAACP Legal Defense Fund), as Rothstein's invaluable examination shows that only by relearning this history can we finally pave the way for the nation to remedy its unconstitutional past.

Other Editions - The Color of Law by Richard Rothstein 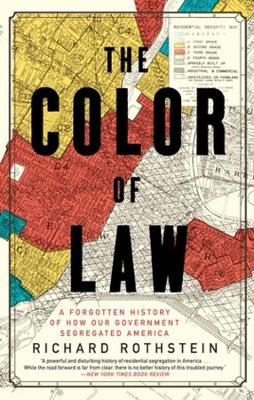 Book Reviews - The Color of Law by Richard Rothstein

» Have you read this book? We'd like to know what you think about it - write a review about Color of Law book by Richard Rothstein and you'll earn 50c in Boomerang Bucks loyalty dollars (you must be a Boomerang Books Account Holder - it's free to sign up and there are great benefits!)

Richard Rothstein is a research associate of the Economic Policy Institute and a Fellow at the Thurgood Marshall Institute of the NAACP Legal Defense Fund. He lives in California, where is a Fellow of the Haas Institute at the University of California-Berkeley.

A Preview for this title is currently not available.
More Books By Richard Rothstein
View All

Bariatric and Metabolic Endoscopy, An Issue of Gastrointestinal Endoscopy Clinics
No Stock on Hand, Supplier Has No Due Date for Supply.
$127.76 $141.95