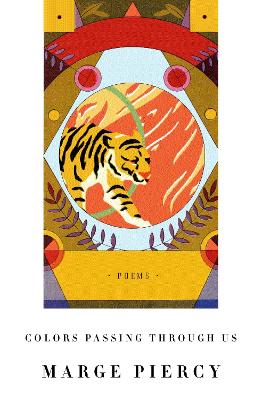 Colors Passing Through Us

Description - Colors Passing Through Us by Marge Piercy

In Colors Passing Through Us, Marge Piercy is at the height of her powers, writing about what matters to her most: the lives of women, nature, Jewish ritual, love between men and women, and politics, sexual and otherwise. Feisty and funny as always, she turns a sharp eye on the world around her, bidding an ex-hausted farewell to the twentieth century and singing an "electronic breakdown blues" for the twenty-first.

She memorializes movingly those who, like los desaparecidos and the victims of 9/11, disappear suddenly and without a trace. She writes an elegy for her mother, a woman who struggled with a deadening round of housework, washing on Monday, ironing on Tuesday, and so on, "until stroke broke / her open." She remembers the scraps of lace, the touch of velvet, that were part of her maternal inheritance and first aroused her sensual curiosity. Here are paeans to the pleasures of the natural world (rosy ripe tomatoes, a mating dance of hawks) as the poet confronts her own mortality in the cycle of seasons and the eternity of the cosmos: "I am hurrying, I am running hard / toward I don't know what, / but I mean to arrive before dark."

Other poems-about her grandmother's passage from Russia to the New World, or the interrupting of a Passover seder to watch a comet pass-expand on Piercy's appreciation of Jewish life that won her so much acclaim in The Art of Blessing the Day. Colors Passing Through Us is a moving celebration of the endurance of love and of the phenomenon of life itself-a book to treasure.

Book Reviews - Colors Passing Through Us by Marge Piercy

» Have you read this book? We'd like to know what you think about it - write a review about Colors Passing Through Us book by Marge Piercy and you'll earn 50c in Boomerang Bucks loyalty dollars (you must be a Boomerang Books Account Holder - it's free to sign up and there are great benefits!)

Marge Piercy is the author of fifteen previous books of poetry. She has also written fifteen novels, including Woman on the Edge of Time; Gone to Soldiers; He, She and It; City of Darkness, City of Light; and Three Women, her most recent, as well as a memoir titled Sleeping with Cats. Her fiction and poetry have been translated into sixteen languages. Among many honors, in 1990, she won the Golden Rose, the oldest poetry award in the country. She lives on Cape Cod with her husband, Ira Wood, the novelist and publisher of Leapfrog Press.

A Preview for this title is currently not available.
More Books By Marge Piercy
View All