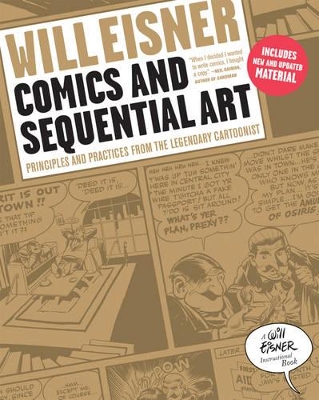 Principles and Practices from the Legendary Cartoonist

Description - Comics and Sequential Art by Will Eisner

Two classic drawing textbooks from an American comics pioneer, revised and enhanced for a new generation.
Based on Will Eisner's legendary course at New York's School of Visual Arts, these guides have inspired generations of artists, students, teachers, and fans. In Comics and Sequential Art, Eisner reveals the basic building blocks and principles of comics, including imagery, the frame, and the application of time, space, and visual forms. Graphic Storytelling and Visual Narrative teaches how to control a story effectively using a broad array of techniques. With examples from Eisner's own catalog and such masters as H. Foster, R. Crumb, Art Spiegelman, Milton Caniff, Al Capp, and George Herriman, these books distill the art of graphic storytelling into principles that every comic artist, writer, and filmmaker should know.

Book Reviews - Comics and Sequential Art by Will Eisner

» Have you read this book? We'd like to know what you think about it - write a review about Comics and Sequential Art book by Will Eisner and you'll earn 50c in Boomerang Bucks loyalty dollars (you must be a Boomerang Books Account Holder - it's free to sign up and there are great benefits!)

Will Eisner was born William Erwin Eisner on March 6, 1917 in Brooklyn, New York. By the time of his death on January 3, 2005, Will Eisner was recognized internationally as one of the giants in the field of sequential art, a term he coined. In a career that spanned nearly eight decades-from the dawn of the comic book to the advent of digital comics-Will Eisner was truly the 'Orson Welles of comics' and the 'father of the Graphic Novel'. He broke new ground in the development of visual narrative and the language of comics and was the creator of The Spirit, John Law, Lady Luck, Mr. Mystic, Uncle Sam, Blackhawk, Sheena and countless others. During World War II, Will Eisner used the comic format to develop training and equipment maintenance manuals for the US Army. After the war this continued as the Army's P.S. Magazine, which is still being produced today. Will Eisner taught Sequential Arts at the New York School of Visual Arts. The textbooks that he wrote based on his course are still bestsellers. In 1978, Will Eisner wrote A Contract with God, the first modern graphic novel. This was followed by almost 20 additional graphic novels over the following 25 years. The "Oscars" of the Comic Industry are called The Eisner Awards, and named after Will Eisner. The Eisners are presented annually before a packed ballroom at Comic-Con International in San Diego, America's largest comics convention. Wizard magazine named Eisner "the most influential comic artist of all time." Michael Chabon's Pulitzer-prize winning novel The Adventures of Kavalier and Clay is based in good part on Eisner. In 2002, Eisner received a Lifetime Achievement Award from the National Federation for Jewish Culture, only the second such honor in the organization's history, presented by Pulitzer Prize-winning cartoonist Art Spiegelman.