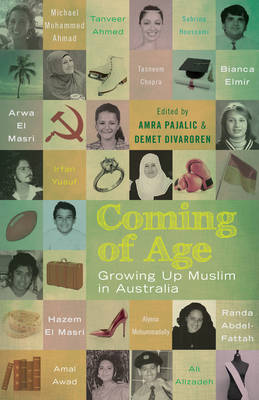 Growing Up Muslim in Australia

Muslim people in Australia come from over seventy countries and represent a wide variety of cultural backgrounds and experiences. Yet we are constantly bombarded by media stories feeding one negative stereotype. What is it really like to grow up Muslim in Australia? In this book, famous and not-so-famous Muslim-Australians tell their stories in their own voices.

The beard, the hijab, the migrant - these are all familiar images associated with Muslim people. But delve deeper and there are many other stories: the young female boxer entering the ring for her first professional bout; a ten-year-old boy who renounces religion; a young woman struggling to reconcile her sexual identity with her faith. These honest and heartfelt stories will resonate with all readers, providing different snapshots of Muslim life in Australia, dispelling myths and stereotypes, and above all celebrating diversity, achievement, courage and determination.

'Coming of Age is the kind of book that will change how readers look at the world. Coloured with many shades of humour, warmth, sadness, anger, determination and honesty, it will resonate with readers from all backgrounds and beliefs.' Bookseller+Publisher


Other Editions - Coming of Age by Demet Divaroren 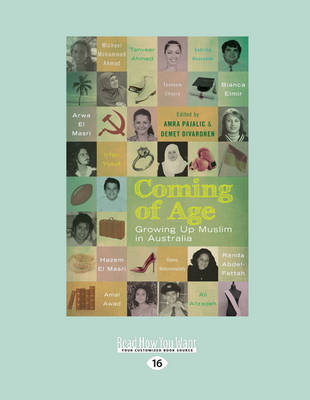 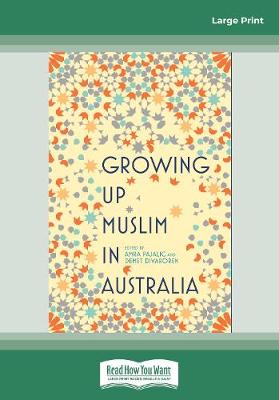 » Have you read this book? We'd like to know what you think about it - write a review about Coming of Age book by Demet Divaroren and you'll earn 50c in Boomerang Bucks loyalty dollars (you must be a Boomerang Books Account Holder - it's free to sign up and there are great benefits!)

Amra Pajalic is a Melbourne-based author of Bosnian background. Her debut novel The Good Daughter won the 2009 Melbourne Prize for Literature's Civic Choice Award, was a finalist in the 2009 Melbourne Prize for Literature Best Writing Award and was shortlisted in the 2007 Victorian Premier's Awards for Best Unpublished Manuscript. Garratt Publishing will publish her novel for children, Amir: Friend on Loan, in 2014. Amra's short stories have placed in competitions, and been published in magazines, journals and anthologies. Her fiction has appeared in the 2004 and 2005 Best Australian Stories and her memoir piece was published in Etchings. Amra conducts short-story workshops and was funded by Artists in Schools to be an Artist in Residence in 2010, 2011 and 2012 in high schools. Her website is www.amrapajalic.com Demet Divaroren was born in Adana, Turkey, and migrated to Australia with her family when she was six months old. She writes long and short fiction and non-fiction exploring life, love and the complexities of human emotions. Demet's writing has appeared in Island magazine, Scribe's New Australian Stories anthology, the Age Epicure and The Big Issue, and she was commended in the Ada Cambridge Biographical Prose Prize 2013. Her first novel Orayt? was shortlisted for the 2008 Australian Vogel Literary Award for an unpublished manuscript. She is the recipient of an Australia Council Artstart Grant, a Rosebank Residential Writing Fellowship, a Varuna Fellowship for a Writing Retreat and a Glenfern Grace Marion Wilson Fellowship. Demet is the Artist in Residence at Deer Park Art Spaces, where she facilitates writing workshops. She is represented by Curtis Brown literary agency. Her website is www.demetdivaroren.com Amra and Demet are co-authors of the book What a Muslim Woman Looks Like, a government-funded publication.