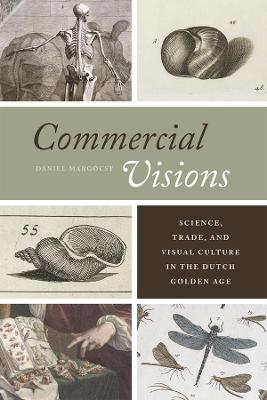 Science, Trade, and Visual Culture in the Dutch Golden Age

Entrepreneurial science is not new; business interests have strongly influenced science since the Scientific Revolution. In Commercial Visions, D??niel Marg??csy illustrates that product marketing, patent litigation, and even ghostwriting pervaded natural history and medicine?the ?big sciences? of the early modern era?and argues that the growth of global trade during the Dutch Golden Age gave rise to an entrepreneurial network of transnational science.
???????????
Marg??csy introduces a number of natural historians, physicians, and curiosi in Amsterdam, London, St. Petersburg, and Paris who, in their efforts to boost their trade, developed modern taxonomy, invented color printing and anatomical preparation techniques, and contributed to philosophical debates on topics ranging from human anatomy to Newtonian optics. These scientific practitioners, including Frederik Ruysch and Albertus Seba, were out to do business: they produced and sold exotic curiosities, anatomical prints, preserved specimens, and atlases of natural history to customers all around the world. Marg??csy reveals how their entrepreneurial rivalries transformed the scholarly world of the Republic of Letters into a competitive marketplace.
???????????
Marg??csy's highly readable and engaging book will be warmly welcomed by anyone interested in early modern science, global trade, art, and culture.

» Have you read this book? We'd like to know what you think about it - write a review about Commercial Visions book by Daniel Margocsy and you'll earn 50c in Boomerang Bucks loyalty dollars (you must be a Boomerang Books Account Holder - it's free to sign up and there are great benefits!)