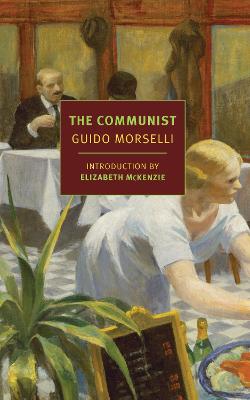 Description - The Communist by Elizabeth McKenzie

The Communist is the story of a life lived in the service of a faith and what happens when that faith is lost. Walter Ferranini, a child of Italy?s agricultural heartland, begins as an earnest autodidact who works as a labor organizer before being driven, under Mussolini, into exile in the United States, the belly of the capitalist beast. After World War II, he returns to Italy and enters parliament as a communist MP. Then Khrushchev?s 1956 denunciation of Stalin?s crimes leads to a crisis in Walter?s life. He has come to question that most basic communist belief, that human life finds its fulfillment in labor, and he writes an article expressing his doubts. It is a scandal, as, in the eyes of the prudish party elders, is his new relationship with Nuccia, a journalist who is a married woman. Under these circumstances, Walter is invited for the first time to visit the Soviet Union, and there he finds himself bewildered beyond words. In The Communist, Guido Morselli portrays a man of conviction cast adrift with deep and compelling sympathy.

» Have you read this book? We'd like to know what you think about it - write a review about Communist book by Elizabeth McKenzie and you'll earn 50c in Boomerang Bucks loyalty dollars (you must be a Boomerang Books Account Holder - it's free to sign up and there are great benefits!)

Guido Morselli (1912-1973) was a novelist and essayist. Born in Bologna, he earned a law degree, served in the Italian army, and traveled abroad, writing reportage and short stories. After the war he completed eight works of fiction, includingaPast Conditional,aDivertimento 1889, andaRoma senza papaa('Rome sans Pope'), none of them published in his lifetime, as well as a volume on Proust and one on faith and criticism. At 60, discouraged by his failure to find a publisher, he committed suicide. The following year, his novels began to come out to much acclaim. a Frederika Randall is a writer and translator of Italian literature. Her translations include Luigi Meneghello'saDeliver Us, Sergio Luzzatto'saThe Body of Il Duce, Padre Pio, and Primo Levi's Resistance, as well as Ippolito Nievo'saRisorgimento novel Confessions of an Italian. She has been awarded a Bogliasco Fellowship, a PEN/Heim grant, and, along with Sergio Luzzatto, the Cundill Prize. She lives in Rome. Elizabeth McKenzie is the author of The Portable Veblen, published byaPenguin Press and 4th Estate. Her work has appeared in The New Yorker, The Atlantic Monthly, Best American Nonrequired Reading, and the Pushcart Prize Anthology, and recorded for NPR's Selected Shorts.aHer collection, Stop That Girl, was short-listed for The Story Prize, and her novel MacGregor Tells the World was a Chicago Tribune, San Francisco Chronicle and Library Journal Best Book of the year. She is the senior editor of the Chicago Quarterly Review and the managing editor of Catamaran Literary Reader.

A Preview for this title is currently not available.
More Books By Elizabeth McKenzie
View All