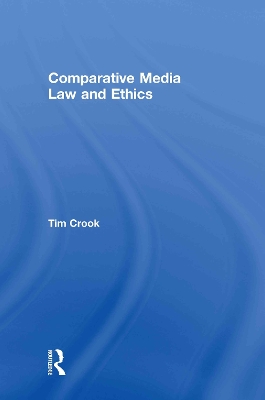 Providing practical and theoretical resources on media law and ethics for the United Kingdom and United States of America and referencing other legal jurisdictions such as France, Japan, India, China and Saudi Arabia, Comparative Media Law and Ethics is suitable for upper undergraduate and postgraduate study and for professionals in the media who need to work internationally.

The book focuses on the law of the United Kingdom, the source of common law, which has dominated the English speaking world, and on the law of the USA, the most powerful cultural, economic, political and military power in the world. Media law and ethics have evolved differently in the US from the UK. This book investigates why this is the case.

Throughout, media law and regulation is evaluated in terms of its social and cultural context.The book has a companion website at providing complementary resources and updated developments on the topics explored.

Other Editions - Comparative Media Law and Ethics by Tim Crook » Have you read this book? We'd like to know what you think about it - write a review about Comparative Media Law and Ethics book by Tim Crook and you'll earn 50c in Boomerang Bucks loyalty dollars (you must be a Boomerang Books Account Holder - it's free to sign up and there are great benefits!)

Tim Crook is Senior Lecturer in Media Law and Ethics and Head of Radio at Goldsmiths College, University of London, as well as being a Visiting Instructor on Media Law to the British Broadcasting Corporation. He has worked professionally in radio, theatre, television and film as a journalist, producer, director and sound designer for more than 30 years and has won more than 60 awards for drama, journalism and production. His previous publications include Radio Drama (1999) and International Radio Journalism (1997).

A Preview for this title is currently not available.
More Books By Tim Crook
View All

The Secret Lives of a Secret Agent Second Edition: Mysterious Life and Times of Alexander Wilson (US & International Edition)
$55.31 $61.45