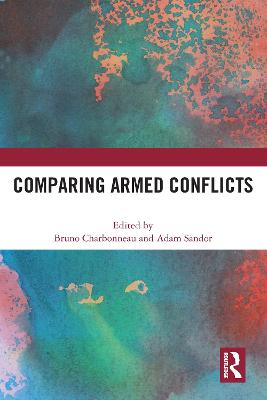 Comparing armed conflicts primes the production of categories that, when mobilized, can alter the trajectories of the conflicts. Considering the political dynamism of spaces of conflict and intervention, and that practitioners regularly seek out academic expertise, this book discusses the possibilities and limits of comparative approaches to understanding armed conflict and intervention.

Capacity-building experts, development workers, international organizations, and diplomats use their previous experiences and bring them into new contexts to understand and respond to their environment. Conflict actors can also make comparisons to buttress their political position in negotiations, consolidate their control over fighters, and as calls for transnational rebel solidarity. The use of such comparisons is an inherently political move and it has an impact on the production of scientific knowledge, on conflict dynamics themselves, and on the formulation and implementation of conflict management policy: comparison is inherently a practice of order-making. While there are important epistemological and methodological stakes associated with researchers engaging in comparison, there are also important productive effects connected to the research avenues taken.

The chapters in this book were originally published in the Civil Wars.

» Have you read this book? We'd like to know what you think about it - write a review about Comparing Armed Conflicts book by Bruno Charbonneau and you'll earn 50c in Boomerang Bucks loyalty dollars (you must be a Boomerang Books Account Holder - it's free to sign up and there are great benefits!)


A Preview for this title is currently not available.
More Books By Bruno Charbonneau
View All