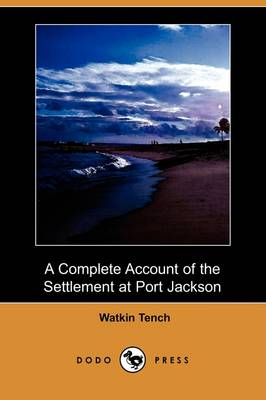 A Complete Account of the Settlement at Port Jackson (Dodo Press)

Lieutenant-General Watkin Tench (1758-1833) was a British Marine officer who is best known for publishing two books describing his experiences in the First Fleet, which established the first settlement in Australia in 1788. His two accounts, A Narrative of the Expedition to Botany Bay (1789) and A Complete Account of the Settlement at Port Jackson (1793) provide a fascinating and entertaining account of the arrival and first four years of the colony. Little is known of Tench apart from what he writes in his three books and his service record. He joined His Majesty's Marine Forces, Plymouth division, as a Second Lieutenant in 1776, then he was promoted to 1st Lieutenant in 1778. He fought against the American forces in their War of Independence where he was captured when HMS Mermaid was driven ashore on the Maryland coast by the French under Comte d'Estaing. He was promoted to Captain-Lieutenant in September 1782 and went on half-pay in May 1786. In October, 1786 the Admiralty called for volunteers for a three-year tour of Botany Bay and he sailed on the transport ship Charlotte in May 1787.

» Have you read this book? We'd like to know what you think about it - write a review about Complete Account of the Settlement at Port Jackson (Dodo Press) book by Watkin Tench and you'll earn 50c in Boomerang Bucks loyalty dollars (you must be a Boomerang Books Account Holder - it's free to sign up and there are great benefits!)


A Preview for this title is currently not available.
More Books By Watkin Tench
View All