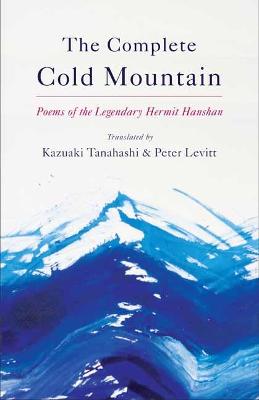 Poems of the Legendary Hermit Hanshan

The Hanshan ("Cold Mountain") poems are unquestionably the most enduring works to come out of the poetically rich Tang dynasty (seventh to early tenth century) of China. They entered modern Western consciousness though the influence of the Beat generation writers for whom they were a major influence, and they're rightfully known as some of the most accessible of classic Chinese poetry--the kind of poetry that speaks even to those who don't usually relate to poetry. They have been much translated. This new translation is unique both in its scope--it includes all the poems traditionally associated with Hanshan, more than 300--and in its tone- it is a collaboration between two renowned and very different poets and Zen students who honor the Buddhist elements of the verse while perceiving in the Cold Mountain poems a kind of humor and tenderness of heart that makes their renditions particularly delightful. The translation includes the full Chinese text of the poems and a wealth of fascinating ancillary materials.
This collection also stands out from the others in its organization- scholars often identify two different authors of the Cold Mountain poems, whereas Tanahashi and Levitt identify three poets from three different periods (explained in a fascinating appendix), and they have arranged the poems accordingly.

» Have you read this book? We'd like to know what you think about it - write a review about Complete Cold Mountain book by Kazuaki Tanahashi and you'll earn 50c in Boomerang Bucks loyalty dollars (you must be a Boomerang Books Account Holder - it's free to sign up and there are great benefits!)

KAZUAKI TANAHASHI is a world-renowned calligraphic artist, a Zen teacher, author, environmentalist, peaceworker--and translator, particularly of the works of Eihei Dogen. He is author or translator of numerous books, and his art has been featured in shows throughout the world. PETER LEVITT is a poet and Zen teacher who lives in British Columbia. He was authorized to teach in the lineage of Shunryu Suzuki by Norman Zoketsu Fischer. He is the author of several collections of poetry and is the recipient of the prestigious Lannan Foundation Award in Poetry. He also teaches creativity in writing and other endeavors in various venues--he is the author of Fingerpainting on the Moon- Writing and Creativity as a Path to Freedom (Harmonym, 2003).

A Preview for this title is currently not available.
More Books By Kazuaki Tanahashi
View All