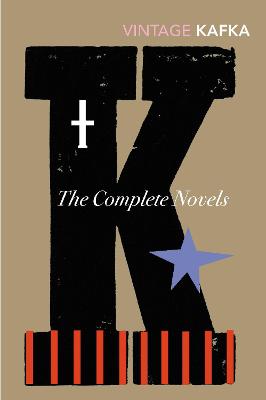 The Complete Novels Of Kafka

Description - The Complete Novels Of Kafka by Franz Kafka

The complete novels of one of the greatest German writers of all time, collected together in one literary masterpiece.

Kafka's characters are victims of forces beyond their control, estranged and rootless citizens deceived by authoritarian power. Filled with claustrophobic description and existential profundity, Kafka has been compared to a literary Woody Allen.

In The Trial Joseph K is relentlessly hunted for a crime that remains nameless.

The Castle follows K in his ceaseless attempts to enter the castle and to belong somewhere.

In Amerika Karl Rossmann also finds himself isolated and confused when he is 'packed off to America by his parents'. Here, ordinary immigrants are also strange, and 'America' is never quite as real as it seems.

THE CLASSIC TRANSLATION BY WILLA AND EDWIN MUIR

Book Reviews - The Complete Novels Of Kafka by Franz Kafka

» Have you read this book? We'd like to know what you think about it - write a review about Complete Novels Of Kafka book by Franz Kafka and you'll earn 50c in Boomerang Bucks loyalty dollars (you must be a Boomerang Books Account Holder - it's free to sign up and there are great benefits!)

Franz Kafka (1883-1924) was born into a Jewish family in Prague. In 1906 he received a doctorate in jurisprudence, and for many years he worked a tedious job as a civil service lawyer investigating claims at the state Worker's Accident Insurance Institute. He never married, and published only a few slim volumes of stories during his lifetime. Meditation, a collection of sketches, appeared in 1912; The Stoker- A Fragment in 1913; The Metamorphosis in 1915; The Judgement in 1916; In the Penal Colony in 1919; and A Country Doctor in 1920. Only a few of his friends knew that Kafka was also at work on the great novels that were published after his death from tuberculosis- America, The Trial, and The Castle.

A Preview for this title is currently not available.
More Books By Franz Kafka
View All