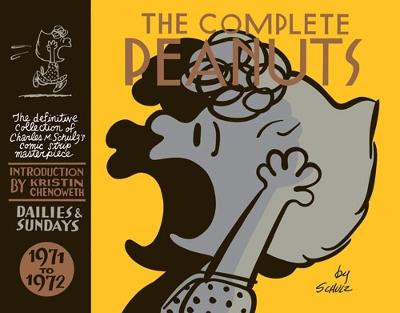 Peanuts surges into the 1970s with Schulz at the peak of his powers and influence: a few jokes about Bob Dylan, Women's Liberation and Everything You Always Wanted to Know About Sex aside, these two years are as timeless as Peanuts ever was. Sally Brown elbows her way to center stage, at least among the humans, and is thus the logical choice for cover girl .and in her honour, the introduction is provided by Broadway, television and film star Kristin Chenoweth, who first rose to Tony-winning fame with her scene-stealing performance as Sally in You're a Good Man, Charlie Brown.

Two long Summer-camp sequences involve Charlie Brown and Peppermint Patty, who has decided that Charlie Brown is madly in love with her, much to his clueless confusion. Snoopy shows up at camp as well, as does Peppermint Patty's new permanent sidekick, the one and only Marcie. The eternally mutable Snoopy mostly shakes off his World War I Flying Ace identity and turns into Joe Cool, college hipster extraordinaire. He writes a fan letter to his favourite author, Miss Helen Sweetstory, then goes on a journey to meet her, and finally enlists Charlie Brown's help when her latest opus, The Six Bunny-Wunnies Freak Out, falls afoul of censors.

Also, Woodstock attends worm school, falls in love with a worm (perhaps the most doomed unrequited Peanuts love story ever!), and is nearly eaten by the neighbours' cat .Peppermint Patty is put on trial for another dress code violation .Snoopy turns Linus's blanket into not one but two sportcoats .Lucy hits a home run .and the birth of one Rerun Van Pelt! 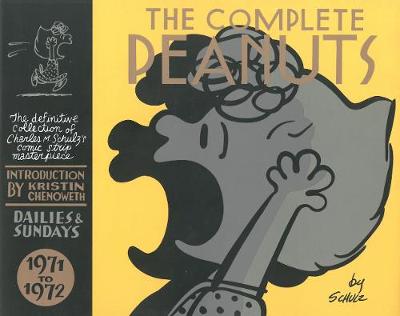 » Have you read this book? We'd like to know what you think about it - write a review about Complete Peanuts 1971-1972 book by Charles M. Schulz and you'll earn 50c in Boomerang Bucks loyalty dollars (you must be a Boomerang Books Account Holder - it's free to sign up and there are great benefits!)

Charles M. Schulz was born in Minneapolis, Minnesota in 1922 and grew up in Saint Paul. He gained a reputation worldwide as a cartoonist for his work on Peanuts. He died in 2000. Kristin Chenoweth is an American singer and actress, who has worked in film, television and in musical theatre. She is best known on Broadway for her Tony Award-winning performance as Sally Brown in You're a Good Man, Charlie Brown, and for originating the role of Glinda in the musical Wicked. She also starred in NBC's The West Wing and the ABC comedy-drama Pushing Daisies, for which she won an Emmy Award.

A Preview for this title is currently not available.
More Books By Charles M. Schulz
View All