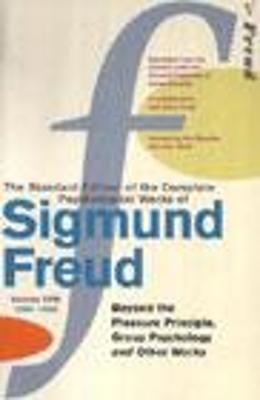 Volume 18 of the Standard Edition of The Complete Psychological Works of Sigmund Freud - Beyond the Pleasure Principal, Group Psychology and Other Works (1920 - 1922)

Beyond the Pleasure Principal, Group Psychology and Other Works (1920 - 1922)

» Have you read this book? We'd like to know what you think about it - write a review about Complete Psychological Works Of Sigmund Freud, The Vol 18 book by Sigmund Freud and you'll earn 50c in Boomerang Bucks loyalty dollars (you must be a Boomerang Books Account Holder - it's free to sign up and there are great benefits!)

Sigmund Freud was born in 1856 in Moravia; between the ages of four and eighty-two his home was in Vienna- in 1938 Hitler's invasion of Austria forced him to seek asylum in London, where he died in the following year. His career began with several years of brilliant work on the anatomy and physiology of the nervous system. He was almost thirty when, after a period of study under Charcot in Paris, his interests first turned to psychology, and another ten years of clinical work in Vienna (at first in collaboration with Breuer, an older colleague) saw the birth of his creation, psychoanalysis. This began simply as a method of treating neurotic patients by investigating their minds, but it quickly grew into an accumulation of knowledge about the workings of the mind in general, whether sick or healthy. Freud was this able to demonstrate the normal development of the sexual instinct in childhood and, largely on the basis of an examination of dreams, arrived at his fundamental discovery of the unconscious forces that influence our everyday thoughts and actions. Freud's life was uneventful, but his ideas have shaped not only many specialist disciplines, but the whole intellectual climate

A Preview for this title is currently not available.
More Books By Sigmund Freud
View All