It was just a godforsaken mountainside, but no place on earth was richer in silver. For a bustling, enterprising America, this was the great bonanza. The dreamers, the restless, the builders, the vultures--they were lured by the glittering promise of instant riches and survived the brutal hardships of a mining camp to raise a legendary boom town. But some sought more than wealth. Val Trevallion, a loner haunted by a violent past. Grita Redaway, a radiantly beautiful actress driven by an unfulfilled need. Two fiercely independent spirits, together they rose above the challenges of the Comstock to stake a bold claim on the future.

Louis L'Amour's Lost Treasures is a project created to release some of the author's more unconventional manuscripts from the family archives.

InLouis L'Amour's Lost Treasures- Volume 1andVolume 2,Beau L'Amour takes the reader on a guided tour through many of the finished and unfinished short stories, novels, and treatments that his father was never able to publish during his lifetime. L'Amour's never-before-seen first novel,No Traveller Returns,faithfully completed for this program, is a voyage into danger and violence on the high seas.

Additionally, many beloved classicswill be rereleased with an exclusive Lost Treasures postscript featuring previously unpublished material, including outlines, plot notes, and alternate drafts. These postscripts tell the story behind the stories that millions of readers have come to know and cherish.

Other Editions - Comstock Lode: A Novel by Louis L'Amour 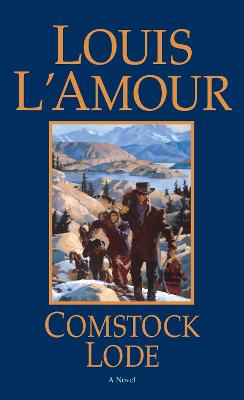 » Have you read this book? We'd like to know what you think about it - write a review about Comstock Lode: A Novel book by Louis L'Amour and you'll earn 50c in Boomerang Bucks loyalty dollars (you must be a Boomerang Books Account Holder - it's free to sign up and there are great benefits!)


A Preview for this title is currently not available.
More Books By Louis L'Amour
View All

Louis L'Amour's Lost Treasures: Volume 1: Unfinished Manuscripts, Mysterious Stories, and Lost Notes from One of the World's Most Popular Novelists
$59.04 $65.60