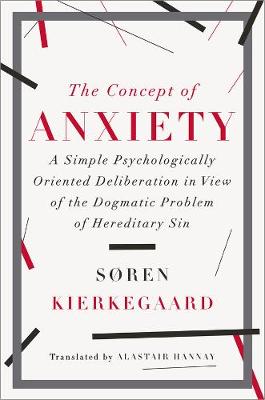 The Concept of Anxiety

Description - The Concept of Anxiety by Soren Kierkegaard

This first new translation of Kierkegaard's masterwork in a generation brings an essential work of modern philosophy to vivid life.
Although Soren Kierkegaard's death in the fall of 1855 foreshadowed a lasting split between conservative Christians and young contemporaries who saw him as a revolutionary thinker, it was not until the turn of the twentieth century-and beyond the borders of his native Denmark-that his lasting significance came to be felt. By transcending distinctions of genre, Kierkegaard brought traditionally separated disciplines to bear on deep human concerns and was able, through his profound self-insight, to uncover the strategies with which we try to deal with them. As a result, he is hailed today as no less than the father of modern psychology and existentialism.
While the majority of Kierkegaard's work leading up to The Concept of Anxiety dealt with the intersection of faith and knowledge, here the renowned Danish philosopher turns to the perennial question of sin and guilt. First published in 1844, this concise treatise identified-long before Freud-anxiety as a deep-seated human state, one that embodies the endless struggle with our own spiritual identities. Ably synthesizing human insights with Christian dogma, Kierkegaard's "psychological deliberation" suggests that our only hope in overcoming anxiety is not through "powder and pills" but by embracing it with open arms. Indeed, for Kierkegaard, it is only through our experiences with anxiety that we are able to become truly aware of ourselves and the freedoms and limitations of our own existence.
While Kierkegaard's Danish prose is surprisingly rich, previous translations-the most recent in 1980-have tended either to deaden its impact by being excessively literal or to furnish it with a florid tone foreign to its original directness. In this new edition, Alastair Hannay re-creates its natural rhythm in a way that will finally allow this overlooked classic not only to become as celebrated as Fear and Trembling, The Sickness unto Death, and Either/Or but also to earn a place as the seminal work of existentialism and moral psychology that it is.

Other Editions - The Concept of Anxiety by Soren Kierkegaard Book Reviews - The Concept of Anxiety by Soren Kierkegaard

» Have you read this book? We'd like to know what you think about it - write a review about Concept of Anxiety book by Soren Kierkegaard and you'll earn 50c in Boomerang Bucks loyalty dollars (you must be a Boomerang Books Account Holder - it's free to sign up and there are great benefits!)

Soren Kierkegaard (1813-1855), the author of more than twenty books, was a Danish philosopher and theologian whose work has been widely recognized as the foundations of both modern psychology and existentialism. Alastair Hannay is an emeritus professor of philosophy at the University of Oslo. Besides several works on Kierkegaard, including a biography, he has previously translated six volumes of Kierkegaard's writings.

A Preview for this title is currently not available.
More Books By Soren Kierkegaard
View All

The Sickness Unto Death: A Christian Psychological Exposition of Edification and Awakening by Anti-Climacus
$16.99 $19.99