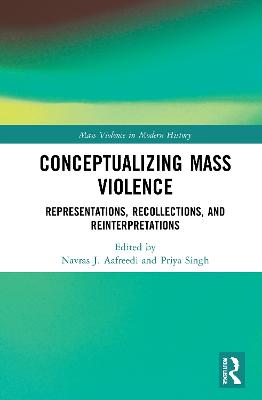 Conceptualizing Mass Violence draws attention to the conspicuous inability to inhibit mass violence in myriads forms and considers the plausible reasons for doing so. Focusing on a postcolonial perspective, the volume seeks to popularize and institutionalize the study of mass violence in South Asia.

The essays explore and deliberate upon the varied aspects of mass violence, namely revisionism, reconstruction, atrocities, trauma, memorialization and literature, the need for Holocaust education, and the criticality of dialogue and reconciliation. The language, content, and characteristics of mass violence/genocide explicitly reinforce its aggressive, transmuting, and multifaceted character and the consequent necessity to understand the same in a nuanced manner. The book is an attempt to do so as it takes episodes of mass violence for case study from all inhabited continents, from the twentieth century to the present. The volume studies 'consciously enforced mass violence' through an interdisciplinary approach and suggests that dialogue aimed at reconciliation is perhaps the singular agency via which a solution could be achieved from mass violence in the global context.

The volume is essential reading for postgraduate students and scholars from the interdisciplinary fields of Holocaust and Genocide Studies, History, Political Science, Sociology, World History, Human Rights, and Global Studies.

» Have you read this book? We'd like to know what you think about it - write a review about Conceptualizing Mass Violence: Representations, Recollections, and Reinterpretations book by Navras J. Aafreedi and you'll earn 50c in Boomerang Bucks loyalty dollars (you must be a Boomerang Books Account Holder - it's free to sign up and there are great benefits!)