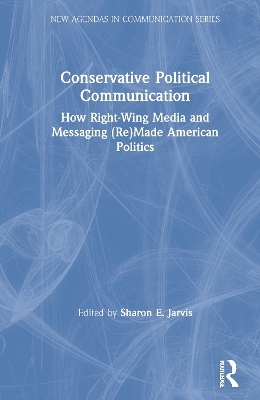 Conservative Political Communication examines the evolution of appeals, media, and tactics in right-wing media and political communication, tracking trends and shifts from the early days of contemporary conservatism in the 1950s to the Trump administration.

The chapters in this edited volume feature the work of senior and junior scholars from the fields of communication, journalism, and political science employing content analytic, experimental, survey, historical, and rhetorical research methodologies. Analyses of the rise of the 24-hour news cycle, the range of partisan news sources, and the role of social media algorithms in political campaigns yield insights for our media and information ecosystems. A key theme across these chapters is how right-wing channels and communications help and hinder partisan fragmentation, a condition whereby novice elected officials create personal conservative brands, appeal to the base through partisan media, and complicate senior leadership's ability to engage in bargaining, compromise, and deal-making. This volume interrogates conservative media and messaging to track where these processes came from, how they functioned in the 2016 U.S. presidential campaign, and where they may be going in the future.

This book will interest scholars and upper-level students of political communication, media and politics, and political science, as well as readers invested in today's political media landscape in the United States. » Have you read this book? We'd like to know what you think about it - write a review about Conservative Political Communication: How Right-Wing Media and Messaging (Re)Made American Politics book by Sharon E. Jarvis and you'll earn 50c in Boomerang Bucks loyalty dollars (you must be a Boomerang Books Account Holder - it's free to sign up and there are great benefits!)


A Preview for this title is currently not available.
More Books By Sharon E. Jarvis
View All