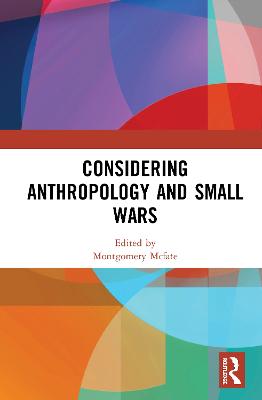 This book includes a variety of chapters that consider the role and importance of anthropology in small wars and insurgencies.

Almost every war since the origins of the discipline at the beginning of the 19th century has involved anthropology and anthropologists. The chapters in this book fall into the following myriad categories of military anthropology.

This book considers the anthropology of small wars and insurgencies through an analysis of the Islamic State's military adaptation in Iraq, Al Shabaab recruiting in Somalia, religion in Israeli combat units, as well as many other topics.

The chapters in this book were originally published as a special issue of the journal, Small Wars & Insurgencies.

» Have you read this book? We'd like to know what you think about it - write a review about Considering Anthropology and Small Wars book by Montgomery Mcfate and you'll earn 50c in Boomerang Bucks loyalty dollars (you must be a Boomerang Books Account Holder - it's free to sign up and there are great benefits!)


A Preview for this title is currently not available.
More Books By Montgomery Mcfate
View All