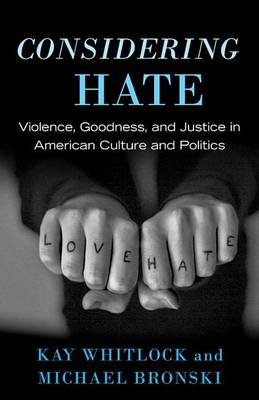 Violence, Goodness, and Justice in American Culture and Politics

A provocative book about rethinking hatred and violence in America

Over the centuries American society has been plagued by brutality fueled by disregard for the humanity of others- systemic violence against Native peoples, black people, and immigrants. More recent examples include the Steubenville rape case and the murders of Matthew Shepard, Jennifer Daugherty, Marcelo Lucero, and Trayvon Martin. Most Americans see such acts as driven by hate. But is this right? Longtime activists and political theorists Kay Whitlock and Michael Bronski boldly assert that American society's reliance on the framework of hate to explain these acts is wrongheaded, misleading, and ultimately harmful.

All too often Americans choose to believe that terrible cruelty is aberrant, caused primarily by "extremists" and misfits. The inevitable remedy of intensified government-based policing, increased surveillance, and harsher punishments has never worked and does not work now. Stand-your-ground laws; the US prison system; police harassment of people of color, women, and LGBT people; and the so-called war on terror demonstrate that the remedies themselves are forms of institutionalized violence.

Whitlock and Bronski invite readers to radically reimagine the meaning and structures of justice within a new framework of community wholeness, collective responsibility, and civic goodness.
From the Hardcover edition. 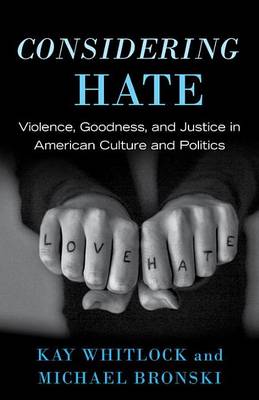 » Have you read this book? We'd like to know what you think about it - write a review about Considering Hate book by Kay Whitlock and you'll earn 50c in Boomerang Bucks loyalty dollars (you must be a Boomerang Books Account Holder - it's free to sign up and there are great benefits!)

Kay Whitlock is a writer and activist who has been involved with racial, gender, queer, and economic justice movements since 1968. She is coauthor ofthe award-winning "Queer (In)Justice: The Criminalization of LGBT People in the United States"and cofounder and contributing editor for the weekly Criminal Injustice series at CriticalMassProgress.com. She lives in Missoula, Montana. Michael Bronski has been involved in gay liberation as a political organizer, writer, and editor for more than four decades. The author of several award-winning books, including"A Queer History of the United States," he most recently coauthored" You Can Tell Just by Looking: And 20 Other Myths about LGBT Life and People." Bronski is Professor of the Practice in Activism and Media in the Studies of Women, Gender, and Sexuality at Harvard University and lives in Cambridge, Massachusetts. "From the Hardcover edition.""

A Preview for this title is currently not available.
More Books By Kay Whitlock
View All