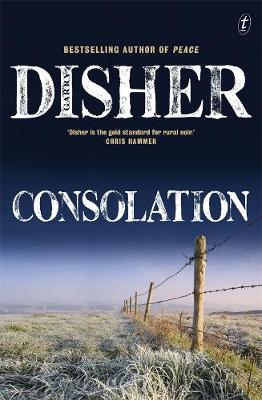 Constable Paul Hirschhausen has a snowdropper on his patch. Someone is stealing women's underwear, and Hirsch knows enough about that kind of crime-how it can escalate-not to take it lightly.

But the more immediate concerns are a call from the high school, a teacher worried about a student who may be in danger at home. Another call, a different school- a man enraged about the principal's treatment of his daughter.

A little girl in harm's way and an elderly woman in danger. An absent father who isn't where he's supposed to be; another who flees to the back country armed with a rifle. Families under pressure. And the cold, seeping feeling that something is very, very wrong.

» Have you read this book? We'd like to know what you think about it - write a review about Consolation book by Garry Disher and you'll earn 50c in Boomerang Bucks loyalty dollars (you must be a Boomerang Books Account Holder - it's free to sign up and there are great benefits!)

I've loved the two previous books in Garry Disher's Paul Hirschhausen series and Consolation has certainly cemented this as one of my all-time favourite crime series. Six months after the events of Peace, Constable Paul Hirschhausen remains the lone police officer responsible for the remote South Australian town of Tiverton and its surrounding area. In the midst of a bitter winter, Hirsch is required to deal with the wide variety of criminal, domestic and community issues that readers have come to expect. There's a snowdropper active in Tiverton and nearby Redruth, who curiously seems to target the undergarments of the area's senior residents left hanging outside on lines. Hirsch is called by a teaching colleague of his partner Wendy, and asked to carry out a welfare check on a child who is schooled remotely. A local stock dealer doesn't seem to be honouring his financial commitments, sending ripples throughout the small community. A volatile farmer causes ructions at the local primary school when he turns up and threatens the principal over percieved unfair treatment of his daughter. All fairly standard fare for a country copper. However, it doesn't take long for the various call-outs to develop and become more complicated, and with the unexpected absence of his sergeant from Redruth, Hirsch now finds himself responsible for a wider area and two junior officers. Like Bitter Wash Road (aka Hell to Pay) and Peace, Consolation is an action-packed and engrossing rural noir read, with many complex and intersecting storylines and a great collection of well-developed characters. Disher's portrayal of the landscape, climate and issues facing those who live in the backblocks of South Australia remain as evocative as ever. The well-crafted prose and realistic dialogue made this an unputdownable read for me. I can't wait for my next Hirsch fix! My thanks to Garry Disher, publisher Text Publishing and NetGalley for the opportunity to read and review Consolation prior to publication.

5 stars Consolation is the third book in the Paul Hirschhausen series by popular Australian author, Garry Disher. If it was intended as device to remove him from the close contact (and wrath) of his colleagues, Hirsch's demotion to the one-cop station in rural Tiverton has now morphed into something else: he inhabits the role with quiet purpose and an unexpected satisfaction. Hirsch has become part of the community.

During the August chill, Hirsch makes a welfare check revealing a case of child cruelty, swiftly followed by an angry parent terrorising the school principal. Hirsch proves a talent for mediation, but senses resentment simmering.

Follow-ups with victims of a persistent snow-dropper, and of Irish roof-repair scammers are added to his regular patrols, but then a nasty incident puts him also in charge of Redruth Police Station and on the trail of a gun-toting pair seeking revenge. Filled with toxic masculinity, they’re not behaving like fugitives, indulging in thefts, intimidation and arson.

This is another excellent dose of Hirsch. Not only does he deal with financial irregularities in the bank accounts of vulnerable elderly, possible undue influence by neighbours or family, and a missing husband, he also gets stuck in the mud, acquires a stalker and is restrained by his own handcuffs. The kidnap of a teen and an armed stand-off provide exciting climaxes.

With his often-exquisite prose, Disher easily evokes his setting: “He’d been formed by a city, its exact delineations of asphalt streets and bricks in orderly rows, but out here the angles were unpredictable. Roads shot off in unlikely directions, buildings decayed at a lean and the endless flatland was neither endless nor flat, throwing up stone reef patches or plunging into gullies. And it was a landscape charged with unheard testimony: an ochre hand stencil in a cave; a stick figure carved into a rockface; a grinding tool laid bare after a flash flood.”

Amid a glut of flawed heroes, Hirsch is a refreshing protagonist: comfortable in his own skin; not perfect but certainly principled; not battling drugs or alcohol, not tempted by illegal or immoral activity; an essentially tireless cop, exuding integrity, dedicated to enforcement and protection tempered with the judgement calls essential in rural policing. Fans can only hope this is not the last of Tiverton and Constable Paul Hirschhausen. Brilliant Australian rural crime fiction. This unbiased review is from an uncorrected proof copy provided by NetGalley and Text Publishing.


A Preview for this title is currently not available.
More Books By Garry Disher
View All