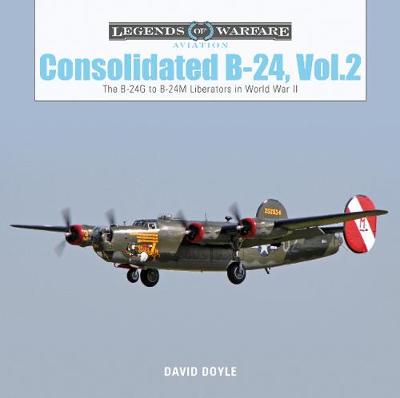 Consolidated B24 Vol.2: The B24G to B24M Liberators in World War II

Description - Consolidated B24 Vol.2: The B24G to B24M Liberators in World War II by David Doyle

The B-24 Liberator remains to this day the world's most produced heavy bomber and multi-engine aircraft, and the most-produced military aircraft in US history, with almost 19,000 examples leaving the assembly lines of five plants. Through a broad range of photos gathered from around the world, this book, the second of two volumes on the B-24, chronicles the design, development, and wartime use of the iconic late-production aircraft, featuring gun turrets on the nose. The story of these iconic WWII aircraft is told through carefully researched photos, many never before published, which are reproduced in remarkable clarity. Large, clear images, coupled with descriptive and informative captions, unlock the secrets of this aircraft. Part of the Legends of Warfare series. AUTHOR: Author of more than 100 books, David Doyle's aviation books are noted for their thorough coverage of historic aircraft and his celebrated ability to locate scarce vintage imagery. SELLING POINTS: Chronicles the design, development, and wartime use of the iconic late models of the B-24 Describes and illustrates the evolution of the B-24G to the B-24M, including a detailed look at the iconic B-24J Profusely illustrated with scarce archival photographs from diverse collections, including previously unpublished images 291 colour and b/w photographs

» Have you read this book? We'd like to know what you think about it - write a review about Consolidated B24 Vol.2: The B24G to B24M Liberators in World War II book by David Doyle and you'll earn 50c in Boomerang Bucks loyalty dollars (you must be a Boomerang Books Account Holder - it's free to sign up and there are great benefits!)