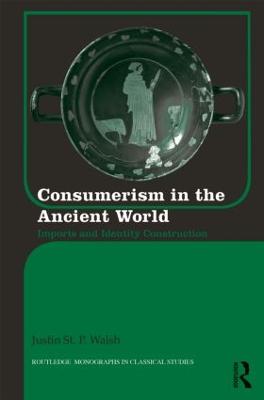 Consumerism in the Ancient World

Greek pottery was exported around the ancient world in vast quantities over a period of several centuries. This book focuses on the Greek pottery consumed by people in the western Mediterranean and trans-Alpine Europe from 800-300 BCE, attempting to understand the distribution of vases, and particularly the reasons why people who were not Greek decided to acquire them. This new approach includes discussion of the ways in which objects take on different meanings in new contexts, the linkages between the consumption of goods and identity construction, and the utility of objects for signaling positive information about their owners to their community. The study includes a database of almost 24,000 artifacts from more than 230 sites in Portugal, Spain, France, Switzerland, and Germany. This data was mapped and analyzed using geostatistical techniques to reveal different patterns of consumption in different places and at different times. The development of the new approaches explored in this book has resulted in a shift away from reliance on the preserved fragments of ancient Greek authors' descriptions of western Europe, remains of monumental buildings, and major artworks, and toward investigation of social life and more prosaic forms of material culture.

ADDITIONAL E-RESOURCES FOR THIS BOOK ARE AVAILABLE:

Other Editions - Consumerism in the Ancient World by Justin St. P. Walsh » Have you read this book? We'd like to know what you think about it - write a review about Consumerism in the Ancient World book by Justin St. P. Walsh and you'll earn 50c in Boomerang Bucks loyalty dollars (you must be a Boomerang Books Account Holder - it's free to sign up and there are great benefits!)

Justin St. P. Walsh is Assistant Professor in the School of Art at Chapman University. He has worked for more than a decade at archaeological sites across the Mediterranean, especially Morgantina in Sicily, and has been the recipient of a Rome Prize, a Fulbright Grant to Greece, and numerous other awards. He is the author of several articles on Greek pottery, cross-cultural interactions, and the protection of cultural heritage.

A Preview for this title is currently not available.
More Books By Justin St. P. Walsh
View All

Consumerism in the Ancient World: Imports and Identity Construction
$77.21 $77.99