A Contemporary Introduction to Sociology

Description - A Contemporary Introduction to Sociology by Jeffrey C. Alexander

The influential authors significantly update their popular introductory text that invites students to reflect on their lives in the context of the combustible leap from modern to postmodern life. The authors show how culture is central to understanding many world problems as they challenge readers to confront the problems and possibilities of an era in which the futures of the physical and social environments seem uncertain. As culture rapidly changes in the 21st century, the authors have successfully incorporated these nuances with many important updates on race and racism, Black Lives Matter, the rise of populist politics, ISIS, new social media, feminist perspectives on sex work, trans and non-gender conforming identities, and more.

New to this edition:

New discussions added of arts-based and participatory approaches to research, historical changes in the perception of deviance, legalization of marijuana; Islam vs. secularism in France, new forms of socialization, heteronormative and essentialist language related to sex and gender, intersections of social class and other identities, the prison industrial complex, informal sharing economies, atheism, and more.

How One Stupid Tweet Blew Up Justine Sacco's Life

Like Prohibition, the fight over guns is about something else

Praise for A Contemporary Introduction to Sociology

"Treats sociology as a living, vibrant discipline. The book is a masterful synthesis written in a style that is at once sophisticated, engaging, and accessible."
-Peter Kivisto, Augustana College

"Alexander and Thompson have produced the modern textbook we have all been waiting for-comprehensive and coherent, but above all intelligent. Designed to make teaching sociology unproblematic, the book is the ideal combination of theory, evidence, and accessibility."
-Bryan S. Turner, editor of The Cambridge Dictionary of Sociology

"Sets new standards in speaking directly to students of the most significant recent developments in sociology and social changes they are living. It shows how inspiring the sociological imagination can be in areas like media, sexuality, gender relations, inequality, and globalization.
-Lyn Spillman, University of Notre Dame

"A truly contemporary sociology, one that mines the classics of sociology for insights into a profoundly changed, postmodern world. Most important, the book reminds us of sociology's capacity to surprise."
-Francesca Polletta, University of California-Irvine

"An extraordinary textbook that synthesizes a wealth of sociological studies. The book is engaging and readable, key concepts are clearly defined, and important theories are succinctly explicated. I highly recommend it to students and faculty alike."
-William Julius Wilson, Harvard University


Other Editions - A Contemporary Introduction to Sociology by Jeffrey C. Alexander 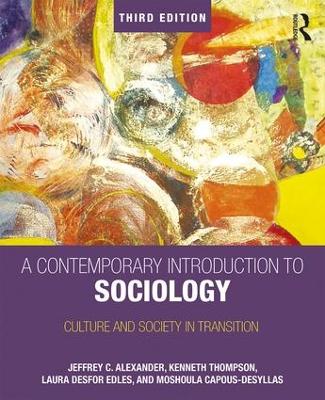 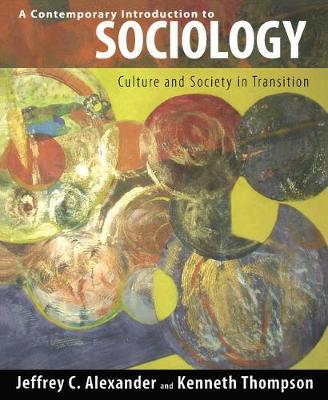 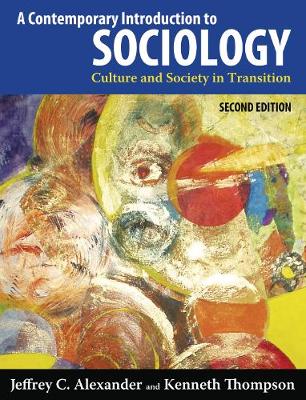 » Have you read this book? We'd like to know what you think about it - write a review about Contemporary Introduction to Sociology book by Jeffrey C. Alexander and you'll earn 50c in Boomerang Bucks loyalty dollars (you must be a Boomerang Books Account Holder - it's free to sign up and there are great benefits!)

Jeffrey C. Alexander is the Lillian Chavenson Saden Professor of Sociology at Yale University, where he is co-director of the Center for Cultural Sociology. Among his many influential books are The Civic Sphere (Oxford University Press, 2006) and The Drama of Social Life (Polity Press, 2017). Kenneth Thompson, Professor Emeritus of Sociology at the Open University, has held positions at Yale, UCLA, Rutgers, and Smith. He is the author of Moral Panics (Routledge, 1998) and co-authored influential sociology textbooks with Stuart Hall and other OU colleagues.. Laura Desfor Edles is Professor of Sociology at California State University, Northridge. Among her many publications are a best-selling series of sociological theory textbooks (co-authored with Scott Appelrouth).Ã£ Ã£ Ã£ Moshoula Capous-Desyllas is Associate Professor of Sociology at California State University Northridge. Her arts-based research is featured in her latest co-authored anthology, Creating Social Change Through Creativity: Anti-Oppressive Arts-Based Research Methodologies (2017).

A Preview for this title is currently not available.
More Books By Jeffrey C. Alexander
View All