Description - The Contractor by Raymond Davis

A lot has been written about the time contractor Raymond Davis spent in a Pakistani jail in 2011. Unfortunately, much of it is misleading-or downright false-information.

Now, the man at the center of the controversy tells his side of the story for the very first time. In The Contractor: How I Landed in a Pakistani Prison and Ignited a Diplomatic Crisis, Davis offers an up-close and personal look at the 2011 incident in Lahore, Pakistan, that led to his imprisonment and the events that took place as diplomats on both sides of the bargaining table scrambled to get him out.

How did a routine drive turn into front-page news? Davis dissects the incident before taking readers on the same journey he endured while trapped in the Kafkaesque Pakistani legal system. As a veteran security contractor, Davis had come to terms with the prospect of dying long before the January 27, 2011 shooting, but nothing could prepare him for being a political pawn in a game with the highest stakes imaginable.

An eye-opening memoir, The Contractor takes the veil off Raymond Davis's story and offers a sober reflection on the true cost of the War on Terror.

Other Editions - The Contractor by Raymond Davis 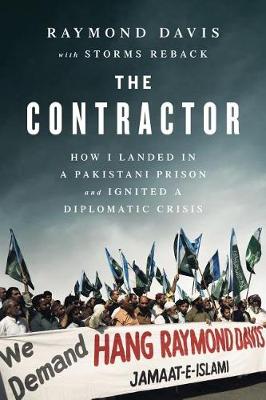 » Have you read this book? We'd like to know what you think about it - write a review about Contractor book by Raymond Davis and you'll earn 50c in Boomerang Bucks loyalty dollars (you must be a Boomerang Books Account Holder - it's free to sign up and there are great benefits!)

Raymond Davis is a former United States Army soldier and military contractor who became the center of an international maelstrom after his involvement in a shooting in Lahore, Pakistan on January 27, 2011. Born and raised in Big Stone Gap, Virginia, Davis spent 10 years in the army, the last six of which he spent as a member of the Special Forces. After being discharged from the army in 2003 because of an injury, Davis worked as a private contractor providing operational security in Afghanistan and Pakistan. Storms Reback is the author of three books All In: The (Almost) Entirely True History of the World Series of Poker, Farha on Omaha: Expert Strategy for Beating Cash Games and Tournaments, and Ship It Holla Ballas!: How a Bunch of 19-Year-Old College Dropouts Used the Internet to Become Poker's Loudest, Craziest, and Richest Crew. He lives in Austin, Texas with his wife and children.

A Preview for this title is currently not available.
More Books By Raymond Davis
View All