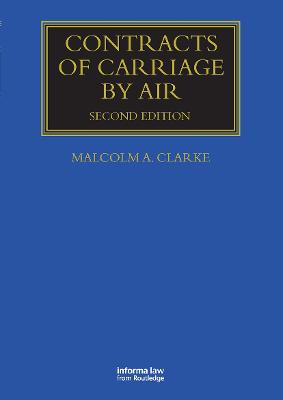 Contracts of Carriage by Air

Description - Contracts of Carriage by Air by Malcolm A. Clarke

Contracts of Carriage by Air, Second Edition contains annotated analysis of the provisions of the international conventions governing the carriage of goods and passengers by air.

This book provides you with practical advice and brings you:

* An overall view of the two liability regimes, followed by a short history of the Warsaw Convention in its various versions and what led to agreement on a single regime, the Montreal Convention, as well as the threat to uniformity posed by EC Directives.
* A statement of the rules of interpretation applicable to conventions of uniform law, illustrated mainly by decisions of the air conventions.
* Commentary on the text of the 1999 Montreal Convention together with commentary on the text of the 1967 Warsaw Convention.
* Reference to decisions of the courts not only of the UK but also those of other common law countries, notably the USA, and countries of civil law, notably France and Germany.

Book Reviews - Contracts of Carriage by Air by Malcolm A. Clarke

» Have you read this book? We'd like to know what you think about it - write a review about Contracts of Carriage by Air book by Malcolm A. Clarke and you'll earn 50c in Boomerang Bucks loyalty dollars (you must be a Boomerang Books Account Holder - it's free to sign up and there are great benefits!)

Malcolm Clarke is a Fellow of St John's College, Cambridge and a Professor of Commercial Contract Law at the University of Cambridge.

A Preview for this title is currently not available.
More Books By Malcolm A. Clarke
View All