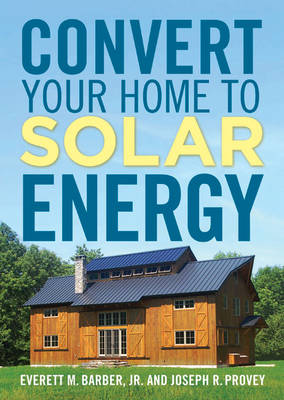 Convert Your Home to Solar Energy

his definitive homeowner's guide to solar energy has arrived at just the right time. With the cost of heating oil and electricity fluctuating wildly, consumers are clamoring for information on alternative energy. This source book covers all the relevant technologies, including solar space and water heating, as well as photovoltaic electricity.

It's practical (with cost calculators, tips on taking advantage of rebates and tax incentives, and advice on finding specialized contractors). And it's authoritative, written by a recognized expert in the field, Everett Barber, Jr., who has 30 years' experience installing all kinds of solar energy systems. Co-author Joseph Provey has been writing about the topic for almost as long. Together, they cover every facet of planning, installing, operating, and maintaining a residential solar energy system.

» Have you read this book? We'd like to know what you think about it - write a review about Convert Your Home to Solar Energy book by Joseph R. Provey and you'll earn 50c in Boomerang Bucks loyalty dollars (you must be a Boomerang Books Account Holder - it's free to sign up and there are great benefits!)

Everett M. Barber, Jr. is the founder of Sunsearch, Inc., a business he ran for over 30 years until he recently retired to speak and write about energy matters. During that time, he and his company designed and installed thousands of solar systems in the southern New England area. In addition, Everett was an adjunct professor of Environmental Technologies at Yale University, where he taught courses in thermal analysis of buildings; system design for heating, ventilating, and air conditioning; plumbing systems; electrical systems; and fire-safe building design. Everett is a member of the American Solar Energy Society, International Solar Energy Society, and ASHRAE. At the latter, he served on the committee that developed the internationally accepted standard for testing of solar thermal collectors.Joseph R. Provey wrote his first articles about solar energy, wind power, wood heat, and saving energy during the last energy crisis, in the late 1970s--and he's still on the beat. More recently, he has written on energy-related topics for "Popular Mechanics," " Fine Homebuilding," " Handy" magazine, and in his latest book, "The Little Green Book: 365 Ways to Love the Planet" (Creative Homeowner). Joe has also served as chief editor to several national home improvement magazines, including "The Family Handyman," " Home Mechanix," and "Practical Homeowner."

A Preview for this title is currently not available.
More Books By Joseph R. Provey
View All

1001 Ideas for Kitchen Organization: The Ultimate Sourcebook for Storage Ideas and Materials
$49.50 $55.00