"A Cuban version of The Godfather" Deadline Hollywood

A gripping tale of gangsters. Drugs. Violence. Sex and murder.

By the mid-1980s, the American underworld was a vicious melting pot of powerful criminal tribes. The most feared was the Cuban mob. This organisation of exiles, ruthlessly led by a kingppin named "battle", was so cold-blooded it was known on both sides of the law as "The Corporation".

Drawing on first-hand accounts and deep research, and with the blistering prose that established him as "America's top chronicler of organised crime", T.J. English's The Corporation reveals how a generation of Cuban refugees, racketeers, corrupt cops, hitmen, and their families got caught up in a very American saga of empire building, criminal enterprise and revolution.

Now to be adapted into a film, with Benicio Del Toro to star.

PRAISE FOR THE CORPORATION

"It's a gripping, blood-soaked story, rich in drama and suspense; if it were a novel, you might expect to see Don Winslow's name attached to it. Fans of true crime, especially those with a hankering for epic-sized stories, should flock to this book." Booklist

"A first-rate saga of crime and corruption that is further testament to the author's reputation among the nation's most accomplished writers." Library Journal (starred review)

Other Editions - The Corporation by T. J. English 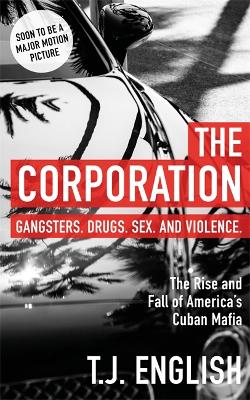 » Have you read this book? We'd like to know what you think about it - write a review about Corporation book by T. J. English and you'll earn 50c in Boomerang Bucks loyalty dollars (you must be a Boomerang Books Account Holder - it's free to sign up and there are great benefits!)

T. J. English is a noted journalist, a screenwriter, and the author of the New York Times bestsellers Havana Nocturne, Paddy Whacked, and The Savage City, as well as of The Westies, a national bestseller, and Born to Kill, which was nominated for an Edgar Award. He has written for Vanity Fair, Playboy, and Esquire, among other publications. His screenwriting credits include episodes of the television crime dramas NYPD Blue and Homicide, for which he was awarded the Humanitas Prize. He lives in New York City.

A Preview for this title is currently not available.
More Books By T. J. English
View All