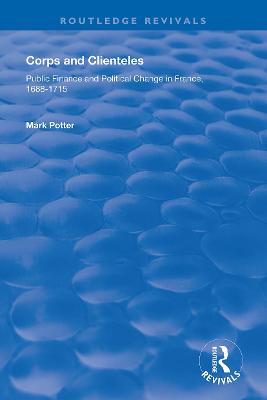 Corps and Clienteles: Public Finance and Political Change in France, 1688-1715

This title was first published in 2003. Few historians would deny that Louis XIV's France dominated the political, cultural and military landscape of late seventeenth century Europe. Yet, the financial foundations on which French hegemony were based remain open to question. Traditionally the regime has been viewed as the archetypal centralizing monarchy in which warfare was the main motor driving reform. Yet recent research has pointed to a more subtle interpretation in which power was negotiated and interests balanced between the crown and members of the elite. Corps and Clienteles offers a unique approach to this debate by focusing on the intersection between institutions and personal relationships in the financial strategies surrounding Louis XIV's final two wars. It argues that, in appealing to the elite for financial support to wage war, Louis in return stabilised many of the structures on which the elite stood, entrenched elements of privilege throughout the political landscape, and devolved power to provincial institutions. Especially with the participation of privileged corps as financial intermediaries, the politics of war finance in the last twenty five years of Louis' reign profoundly influenced the direction in which absolutism developed through the remainder of the Old Regime. The book situates the period 1688 to 1715 as a crucial stage in the development of absolutism; tying the choices available to Louis XIV with the structures and institutions that he inherited from his predecessors, while setting his approach apart. By also measuring the impact of financial negotiations between crown and corps on the later state, it is argued that absolutism under Louis was neither ossified nor in crisis, as the latter half of his reign is often described, but rather dynamic and flexible as it sought to meet the financial costs of warfare.

Other Editions - Corps and Clienteles: Public Finance and Political Change in France, 1688-1715 by Mark Potter » Have you read this book? We'd like to know what you think about it - write a review about Corps and Clienteles: Public Finance and Political Change in France, 1688-1715 book by Mark Potter and you'll earn 50c in Boomerang Bucks loyalty dollars (you must be a Boomerang Books Account Holder - it's free to sign up and there are great benefits!)


A Preview for this title is currently not available.
More Books By Mark Potter
View All