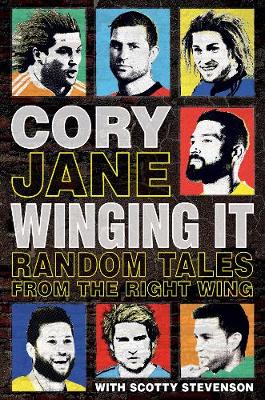 Not since the legendary Eric Rush departed the scene have the All Blacks had a jokester/prankster quite like World Cup-winning winger Cory 'CJ' Jane. A Commonwealth Games Sevens gold medallist and frontline All Black since 2008, Jane is one of the funniest men in New Zealand rugby. He was one of the first All Blacks to embrace social media, in particular Twitter, as a means of connecting with his fans and supporters. His stint as host of the All Blacks online behind-the-scene features 'Room Raiders' was extremely popular and he has also starred as a comments man for Sky Sport. In Winging It: Random Tales from the Right Wing Jane takes the mickey out of everything -- and everyone! -- rugby. No player or occasion is spared the sharp-witted Jane tongue. Get all the goss from the usually fortress-like inner All Blacks sanctum and, most of all, find out all the stuff the players did not want you to know.

» Have you read this book? We'd like to know what you think about it - write a review about Cory Jane Winging It book by Jane Cory & Stevenson Scotty and you'll earn 50c in Boomerang Bucks loyalty dollars (you must be a Boomerang Books Account Holder - it's free to sign up and there are great benefits!)

Cory Jane has been a regular fixture in the All Blacks since making his debut for the national side in 2008. He was a star performer for the All Blacks at the 2011 Rugby World Cup, receiving the Man of the Match Award for his incredible performance against Wallabies in the Cup semi-final. Broadcaster and writer Scotty Stevenson joined SKY Sport in 2007 and has refused to leave. Rugby has been his passion and he continues to work as a commentator, reporter and presenter for New Zealand's national obsession. He has also covered the Olympic Games, Olympic Winter Games and Commonwealth Games. Scotty was appointed Editor of SKY Sport - The Magazine in 2011, and was named New Zealand Magazine Sport Feature Writer of the Year in 2012. A sucker for deadlines, Scotty is also a weekly columnist for The New Zealand Herald.