'For Vikings done right, come to Snorri Kristjansson' Mark Lawrence, author of RED SISTERAfter five years on the road, Helga has finally settled near King Eirik's court in Uppsala, where she's well-regarded as a healer. She's even in a relationship, of sorts.But life is about to get a bit more exciting, for King Eirik has summoned all those who owe him fealty to the King's Council and tempers are already flaring. The body of an unknown boy is found near the river, but with delegations from all over the country arriving and rumours of an imminent attack, there are more important things to attend to than the death of a nobody . . .Only Helga suspects murder, until a second body makes it clear that someone is intent on breaking up the King's Council - and that a traitor walks among them . . . 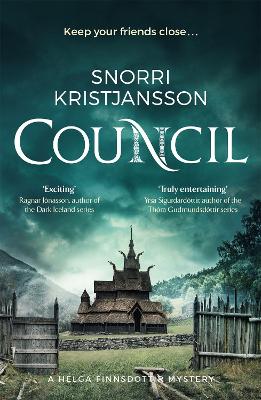 » Have you read this book? We'd like to know what you think about it - write a review about Council: Helga Finnsdottir Book II book by Snorri Kristjansson and you'll earn 50c in Boomerang Bucks loyalty dollars (you must be a Boomerang Books Account Holder - it's free to sign up and there are great benefits!)


A Preview for this title is currently not available.
More Books By Snorri Kristjansson
View All