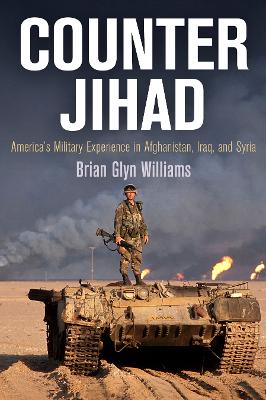 Counter Jihad is a sweeping account of America's military campaigns in the Islamic world. Revising our understanding of what was once known as the War on Terror, it provides a retrospective on the extraordinary series of conflicts that saw the United States deploy more than two and a half million men and women to fight in Afghanistan, Iraq, and Syria. Brian Glyn Williams traces these unfolding wars from their origins in the Soviet invasion of Afghanistan through U.S. Central Command's ongoing campaign to "degrade and destroy" the hybrid terrorist group known as ISIS. Williams takes readers on a journey beginning with the 2001 U.S. overthrow of the Taliban, to the toppling of Saddam Hussein, to the unexpected emergence of the notorious ISIS "Caliphate" in the Iraqi lands that the United States once occupied.

Counter Jihad is the first history of America's military operations against radical Islamists, from the Taliban-controlled Hindu Kush Mountains of Afghanistan, to the Sunni Triangle of Iraq, to ISIS's headquarters in the deserts of central Syria, giving both generalists and specialists an overview of events that were followed by millions but understood by few. Williams provides the missing historical context for the rise of the terror group ISIS out of the ashes of Saddam Hussein's secular Baathist Iraq, arguing that it is only by carefully exploring the recent past can we understand how this jihadist group came to conquer an area larger than Britain and spread havoc from Syria to Paris to San Bernardino. » Have you read this book? We'd like to know what you think about it - write a review about Counter Jihad book by Brian Glyn Williams and you'll earn 50c in Boomerang Bucks loyalty dollars (you must be a Boomerang Books Account Holder - it's free to sign up and there are great benefits!)

Brian Glyn Williams is Professor of Islamic History at the University of Massachusetts, Dartmouth. He was employed by the CIA to track suicide bombers in Afghanistan in 2007. He is author of several books on warfare and terrorism, including Afghanistan Declassified, also available from the University of Pennsylvania Press, and The Last Warlord: The Life and Legend of Dostum, the Afghan Warrior Who Led US Special Forces to Topple the Taliban Regime.

A Preview for this title is currently not available.
More Books By Brian Glyn Williams
View All