Coup is the behind-the-scenes story of an abrupt political transition, unprecedented in US history. Based on 163 interviews, Hunt describes how collaborators came together from opposite sides of the political aisle and, in an extraordinary few hours, reached agreement that the corruption and madness of the sitting Governor of Tennessee, Ray Blanton, must be stopped. The sudden transfer of power that caught Blanton unawares was deemed necessary because of what one FBI agent called ""the state's most heinous political crime in half a century""-a scheme of selling pardons for cash.

On January 17, 1979, driven by new information that some of the worst criminals in the state's penitentiaries were about to be released (and fears that James Earl Ray might be one of them), a small bipartisan group chose to take charge. Senior Democratic leaders, friends of the sitting governor, together with the Republican governor-elect Lamar Alexander (now US Senator from Tennessee), agreed to oust Blanton from office before another night fell. It was a maneuver unique in American political history.

This binder contained the forgotten typescript, written in 1985, of Alexander's recollections of the events leading up to his early inauguration on January 17, 1979. In this expanded edition of Coup, the Senator's 22,000-word text has been added as a lost footnote to Hunt's definitive account.

From the foreword by John L. Seigenthaler: ""The individual stories of those government officials involved in the coup-each account unique, but all of them intersecting-were scattered like disconnected pieces of a jigsaw puzzle on the table of history until the author conceived this book. Perhaps because it happened so quickly, and without major disagreement, protest, or dissent, this truly historic moment has been buried in the public mind. In unearthing the drama in gripping detail, Keel Hunt assures that the 'dark day' will be remembered as a bright one in which conflicted politicians came together in the public interest.


Other Editions - Coup by Keel Hunt 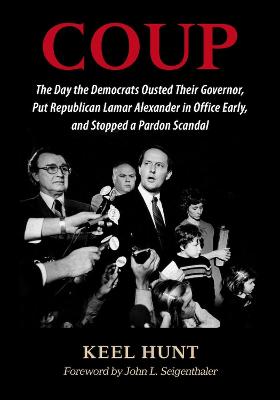 » Have you read this book? We'd like to know what you think about it - write a review about Coup book by Keel Hunt and you'll earn 50c in Boomerang Bucks loyalty dollars (you must be a Boomerang Books Account Holder - it's free to sign up and there are great benefits!)

In his early career, Keel Hunt was a reporter, editorial writer, Washington correspondent, and City Editor for the Nashville Tennessean. He left the newspaper to join Lamar Alexander's successful campaign for Governor of Tennessee. Following the 1978 election, he was appointed Special Assistant to the Governor, serving as a speechwriter and coordinator of the Governor's Policy Group. Since 1986 he has been a speechwriter and public affairs consultant.

A Preview for this title is currently not available.
More Books By Keel Hunt
View All

Crossing the Aisle: How Bipartisanship Brought Tennessee to the 21st Century and Could Save America
$59.33 $65.92