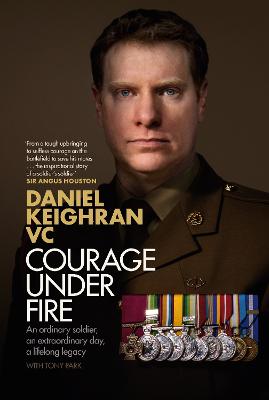 On 24 August 2010, in battle in Afghanistan, Corporal Daniel Keighran risked his life in a hail of gunfire to save his fellow soldiers. His actions saw him awarded the Victoria Cross for Australia, making him the 99th Australian to receive our country's highest award for bravery.

Courage Under Fire tells of Daniel's unlikely journey to become one of Australia's most celebrated soldiers.

Growing up was tough for Daniel. When he was eleven, his father showed up in his life, for the first time, with a gunshot wound to the stomach. He relocated his son, daughter and their mother 400 kilometres away from their loving grandparents and a coastal home to a shack with a dirt floor in outback Queensland. From then on, Daniel fought to maintain a sense of order and purpose amid the chaos of family violence and criminal activity.

Inspired by his much-loved grandfather, a WWII veteran, Daniel joined the army. There he found the structure that was missing from his teen years. Although just 17, Daniel adapted quickly to the demands of life in the military, always willing to learn, always wanting to grow, always seeking to emulate the example of his grandfather.

Courage Under Fire is an outstanding military memoir, packed with tales of multiple tours, accounts of extraordinary camaraderie, and a reflection on the unseen cost of service. Most of all it is a testament to the idea that anything is possible if you know what you stand for.

LONGLISTED FOR THE COLIN RODERICK AWARD 2021

PRAISE FOR COURAGE UNDER FIRE

'One of Australia's most reluctant heroes. A raw, honest, humorous and inspirational story of a modern soldier and the burden of heroism.' Mark Donaldson VC

'From a tough upbringing in outback Queensland to selfless courage on the battlefield in Afghanistan to save his mates, this book tells the inspirational story of a soldier's soldier.' Air Chief Marshal Sir Angus Houston AK, AFC (Ret'd)

'Daniel Keighran would say that he was an ordinary man, just a soldier doing his job. From the occasional chaos and sometimes drama, of his upbringing, in the Army he became remarkable. His gallantry and willingness to put his life on the line is an inspiration to every other man and woman in uniform and to the wider Australian community. His humility and self-effacement since his award only adds to our admiration of this exceptional man.' General Sir Peter Cosgrove AK, AC(Mil), CVO, MC (Ret'd)

'Courage Under Fire reveals the character of a man who wears humility more comfortably than his medals. Leadership can't be taught, but it can be learned. The power is in the story. To read this one is to be a better person and a better leader.' Dr Brendan Nelson AO

'Daniel Keighran's story, from humble beginnings to national celebrity, is one of personal character, extraordinary courage and deep compassion for his mates. His story will make all Australians proud.' Major General John Cantwell AO, DSC (Ret'd)
'The Royal Australian Regiment, to which Dan belonged, has the motto "Duty First". He is the epitome of what that requires of those who serve in its ranks. He is a great Australian with a great Australian story to tell.'
Lieutenant General David Morrison AO (Ret'd)

Other Editions - Courage Under Fire by Daniel Keighran 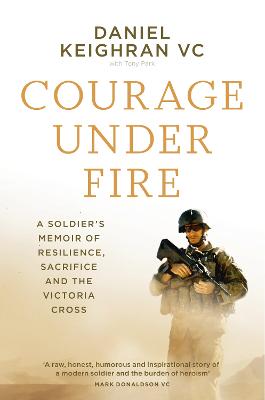 » Have you read this book? We'd like to know what you think about it - write a review about Courage Under Fire book by Daniel Keighran and you'll earn 50c in Boomerang Bucks loyalty dollars (you must be a Boomerang Books Account Holder - it's free to sign up and there are great benefits!)