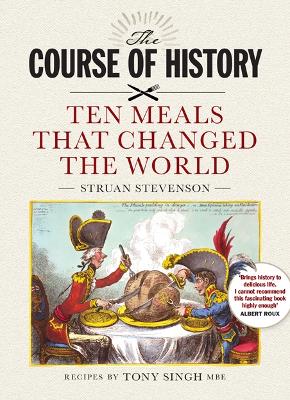 The Course of History

Ten Meals That Changed the World

Description - The Course of History by Struan Stevenson

Many decisions which have had enormous historical consequences have been made over the dinner table, and have been accompanied (and perhaps influenced) by copious amounts of food and wine.

In this book, Struan Stevenson brings to life ten such moments, exploring the personalities, the issues, and, of course, the food which helped shape the course of history. From the claret consumed on the eve of the Battle of Culloden, through the dinners which decided the fates of George Washington, Archduke Ferdinand, and Adolf Hitler, to the diplomatic feasts that decided future relations with Russia, China, and the Middle East, each chapter covers every detail, character, decision, and morsel which decided the course of history.

Book Reviews - The Course of History by Struan Stevenson

» Have you read this book? We'd like to know what you think about it - write a review about Course of History book by Struan Stevenson and you'll earn 50c in Boomerang Bucks loyalty dollars (you must be a Boomerang Books Account Holder - it's free to sign up and there are great benefits!)

Struan Stevenson served three terms as a Member of the European Parliament for Scotland from 1999 to 2014. He is an award-winning author, lecturer, newspaper feature writer and broadcaster. Tony Singh MBE is an acclaimed chef and restaurateur. He is the author of several recipe books and has featured on many cookery programmes. He is a member of the Royal Academy of Culinary Arts, Master Chefs of Great Britain and the Craft Guild of Chefs. In December 2016, he was awarded an MBE by the Queen for his services to the Food and Drink Industry.

A Preview for this title is currently not available.
More Books By Struan Stevenson
View All