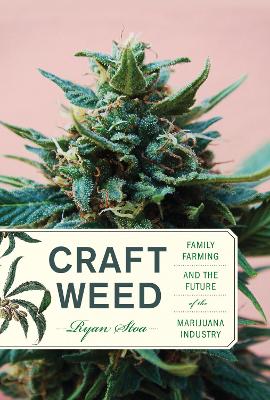 Craft Weed: Family Farming and the Future of the Marijuana Industry

Description - Craft Weed: Family Farming and the Future of the Marijuana Industry by Ryan Stoa

How the future of post-legalization marijuana farming can be sustainable, local, and artisanal.What will the marijuana industry look like as legalization spreads? Will corporations sweep in and create Big Marijuana, flooding the market with mass-produced weed? Or will marijuana agriculture stay true to its roots in family farming, and reflect a sustainable, local, and artisanal ethic? In Craft Weed, Ryan Stoa argues that the future of the marijuana industry should be powered by small farms-that its model should be more craft beer than Anheuser-Busch.
To make his case for craft weed, Stoa interviews veteran and novice marijuana growers, politicians, activists, and investors. He provides a history of marijuana farming and its post-hippie resurgence in the United States. He reports on the amazing adaptability of the cannabis plant and its genetic gifts, the legalization movement, regulatory efforts, the tradeoffs of indoor versus outdoor farms, and the environmental impacts of marijuana agriculture. To protect and promote small farmers and their communities, Stoa proposes a Marijuana Appellation system, modeled after the wine industry, which would provide a certified designation of origin to local crops. A sustainable, local, and artisanal farming model is not an inevitable future for the marijuana industry, but Craft Weed makes clear that marijuana legalization has the potential to revitalize rural communities and the American family farm.
As the era of marijuana prohibition comes to an end, now is the time to think about what kind of marijuana industry and marijuana agriculture we want. Craft Weed will help us plan for a future that is almost here.

Book Reviews - Craft Weed: Family Farming and the Future of the Marijuana Industry by Ryan Stoa

» Have you read this book? We'd like to know what you think about it - write a review about Craft Weed: Family Farming and the Future of the Marijuana Industry book by Ryan Stoa and you'll earn 50c in Boomerang Bucks loyalty dollars (you must be a Boomerang Books Account Holder - it's free to sign up and there are great benefits!)