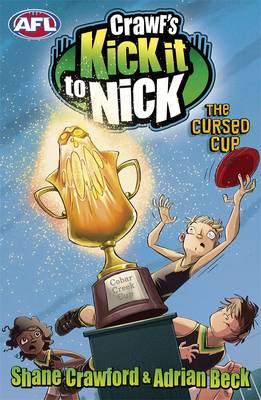 Crawf's Kick It To Nick : The Cursed Cup

Description - Crawf's Kick It To Nick : The Cursed Cup by Adrian Beck

Ben 10 meets Specky Magee! Kick it to Nick is a fast-paced and action-filled series with all the fantastic footy action you'd expect from Shane Crawford. Book one in an eight book series.

It's the first footy game on the new oval and Nick and his team, the Cobar Creek Crocs, are desperate to win the golden cup.

But when the cup is removed from its cabinet it turns into a terrifying metal monster, hungry to destroy everything in its path. And only Nick can stop it.

'Thanks to Kick it to Nick you no longer have to leave footy out on the field!' Jonathan Brown, AFL star

Book Reviews - Crawf's Kick It To Nick : The Cursed Cup by Adrian Beck

» Have you read this book? We'd like to know what you think about it - write a review about Crawf's Kick It To Nick : The Cursed Cup book by Adrian Beck and you'll earn 50c in Boomerang Bucks loyalty dollars (you must be a Boomerang Books Account Holder - it's free to sign up and there are great benefits!)