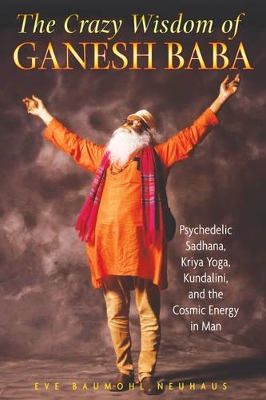 The Crazy Wisdom of Ganesh Baba

* Presents the teachings of Ganesh Baba's "Crea" Yoga, which he derived from the tantric practices of traditional Kriya Yoga

* Includes many anecdotes from the colorful life of this "psychedelic" baba

Shri Mahant Swami Ganeshanand Saraswati Giri (ca. 1895-1987) was known to all who loved and studied with him simply as Ganesh Baba. At the age of four, he was brought back from death through an initiation by Lahiri Mahasaya and through this initiation descends from the same Kriya Yoga lineage as Paramahansa Yogananda. He became a swami under his guru Sivananda and later went on to run the Anandamayi Ma ashram. Drawn to the life of the Naga Babas, he became the head of the Ananda Akhara, Naga followers of Lord Shiva who consider cannabis and other entheogens to be the gift of the gods. The unique set of principles and exercises Ganesh Baba developed from the tantric practices of traditional Kriya Yoga and Shivaism became the core of his personal teachings of Crea (for creative) Yoga. Ganesh Baba's message of systematic synthesis of the spiritual and secular was carefully developed for and embraced by contemporary students in the 1960s, especially those whose path included the use of entheogens.

This book contains the core of Ganesh Baba's Crea Yoga teachings, from the beginning stages of conscious control of one's posture, breath, and attention to finally extending one's awareness to the farthest reaches of the cosmos. Eve Baumohl Neuhaus shows that the life of this scholar and crazy saint was as instructive as his teachings. She includes many personal reminiscences of this inspirational and challenging teacher from her own life and those of fellow students, which demonstrate that Ganesh Baba's extraordinary life was in keeping with his own role as the embodiment of Lord Ganesh, the remover of obstacles.

» Have you read this book? We'd like to know what you think about it - write a review about Crazy Wisdom of Ganesh Baba book by Eve Baumohl Neuhaus and you'll earn 50c in Boomerang Bucks loyalty dollars (you must be a Boomerang Books Account Holder - it's free to sign up and there are great benefits!)

Eve Baumohl Neuhaus was one of many students who worked with Ganesh Baba when he was in the United States from 1979 until 1985, typing and retyping his manuscripts. She has been a schoolteacher since 1988, giving workshops in art, mythology and Crea Yoga in central California where she lives.