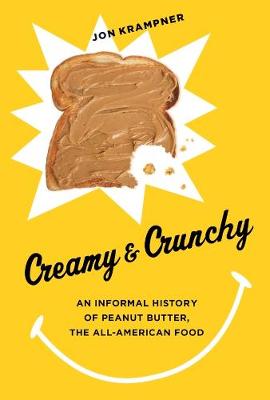 Creamy and Crunchy: An Informal History of Peanut Butter, the All-American Food

Description - Creamy and Crunchy: An Informal History of Peanut Butter, the All-American Food by Jon Krampner

More than Mom's apple pie, peanut butter is the all-American food. With its rich, roasted-peanut aroma and flavor; caramel hue; and gooey, consoling texture, peanut butter is an enduring favorite, found in the pantries of at least 75 percent of American kitchens. Americans eat more than a billion pounds a year. According to the Southern Peanut Growers, a trade group, that's enough to coat the floor of the Grand Canyon (although the association doesn't say to what height).

Americans spoon it out of the jar, eat it in sandwiches by itself or with its bread-fellow jelly, and devour it with foods ranging from celery and raisins ("ants on a log") to a grilled sandwich with bacon and bananas (the classic "Elvis"). Peanut butter is used to flavor candy, ice cream, cookies, cereal, and other foods. It is a deeply ingrained staple of American childhood. Along with cheeseburgers, fried chicken, chocolate chip cookies (and apple pie), peanut butter is a consummate comfort food.

In Creamy and Crunchy are the stories of Jif, Skippy, Peter Pan; the plight of black peanut farmers; the resurgence of natural or old-fashioned peanut butter; the reasons why Americans like peanut butter better than (almost) anyone else; the five ways that today's product is different from the original; the role of peanut butter in fighting Third World hunger; and the Salmonella outbreaks of 2007 and 2009, which threatened peanut butter's sacred place in the American cupboard. To a surprising extent, the story of peanut butter is the story of twentieth-century America, and Jon Krampner writes its first popular history, rich with anecdotes and facts culled from interviews, research, travels in the peanut-growing regions of the South, personal stories, and recipes.

Other Editions - Creamy and Crunchy: An Informal History of Peanut Butter, the All-American Food by Jon Krampner 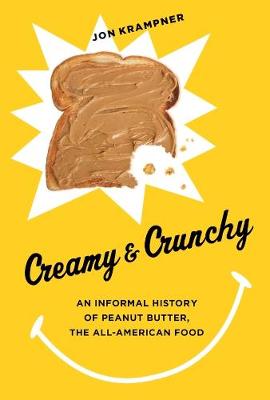 » Have you read this book? We'd like to know what you think about it - write a review about Creamy and Crunchy: An Informal History of Peanut Butter, the All-American Food book by Jon Krampner and you'll earn 50c in Boomerang Bucks loyalty dollars (you must be a Boomerang Books Account Holder - it's free to sign up and there are great benefits!)


A Preview for this title is currently not available.
More Books By Jon Krampner
View All