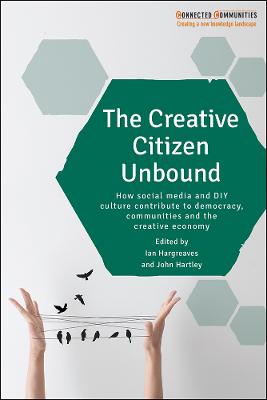 How social media and DIY culture contribute to democracy, communities and the creative economy

The creative citizen unbound introduces the concept of 'creative citizenship' to explore the potential of civically-minded creative individuals in the era of social media and in the context of an expanding creative economy. Contributors examine the value and nature of creative citizenship, not only in terms of its contribution to civic life and to social capital but also to various and more contested definitions of value, both economic and cultural.

Other Editions - The creative citizen unbound by Ian Hargreaves » Have you read this book? We'd like to know what you think about it - write a review about creative citizen unbound book by Ian Hargreaves and you'll earn 50c in Boomerang Bucks loyalty dollars (you must be a Boomerang Books Account Holder - it's free to sign up and there are great benefits!)

Ian Hargreaves is Professor of Digital Economy at Cardiff University and Principal Investigator for the AHRC/EPSRC-funded project Media, Community and the Creative Citizen. He was previously a journalist, spending 15 years on the Financial Times, where he became Deputy Editor; followed by Editorships of the Independent and New Statesman. In the late 1980s, he was Director, BBC News and Current Affairs. In 2009 he conducted a review of creative industries policy for the Welsh Government and in 2011, a review of intellectual property issues for the UK coalition Government. He was awarded a CBE in 2012 for services to the creative economy and higher education. John Hartley is John Curtin Distinguished Professor at Curtin University, Western Australia, where he is Director of the Centre for Culture and Technology. He is also Professor of Journalism, Media and Cultural Studies at Cardiff University, Wales. Author of many books and articles in media, cultural, communication and journalism studies, he pioneered research into the creative economy at the ARC Centre of Excellence for Creative Industries and Innovation (2005-12) as ARC Federation Fellow at Queensland University of Technology. He is an elected Fellow of the International Communication Association and Australian Academy of the Humanities. He was awarded the Order of Australia (AM) in 2009.

A Preview for this title is currently not available.
More Books By Ian Hargreaves
View All